Paulina Gretzky was spotted wearing a Masters-inspired outfit on the 18th green at Augusta National as she cheered on Dustin Johnson. 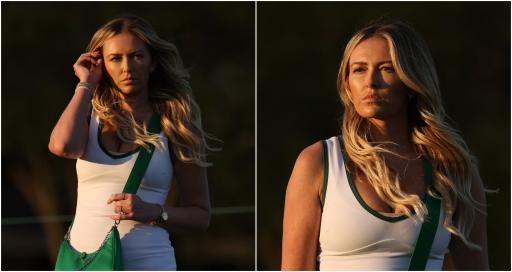 Paulina Gretzky was spotted wearing a Masters-inspired outfit as she cheered on fiancé Dustin Johnson on day one of The Masters.

The 33-year-old wore a green and white dress which was complimented by a green hand bag in a clear nod to the history of Augusta National.

Her fiancé DJ made a solid start to The Masters in his bid to become a two-time winner of the green jacket as he signed for an opening round of 3-under 69.

Johnson, who won the 2020 Masters, made three birdies on a faultless front nine and added another at the par-4 10th. The only blemish of his round came when he dropped one at 17.

There was also a slightly humurous moment when Johnson was almost hit by a stray golf ball from former World No. 1 Jon Rahm on the 12th tee.

Guilty party Rahm struck his second shot from the 11th fairway and the ball came to rest just in front of the American.

Usually you would expect a reaction of fury, but laid-back Johnson is one cool customer and just laughed it off nonchalantly.

Johnson and Gretzky are due to marry later this year having been together since 2013. They share two sons, Tatum, seven, and River, who is four.

They will be getting married at the five-star Blackberry Farm resort in Tennessee.

Pictures of her extravagant bachelorette party were uploaded to her Instagram in February.

Previously asked why it has taken them to get married, Gretzky told the Pillows and Beer podcast: "I just did things my own way, I just didn't want to listen to how everyone else viewed things.

"This guy [Johnson] has no downtime. The stresses from getting everything ready for a wedding would take over mine and his life and what I needed to be was his teammate.

"I needed to be there for him to support him and love him and make sure he is accomplishing what he needed to do."

Check out the picture gallery below