Former CBS broadcaster Peter Kostis took an indirect dig at the US Open champion during Sunday's final round. 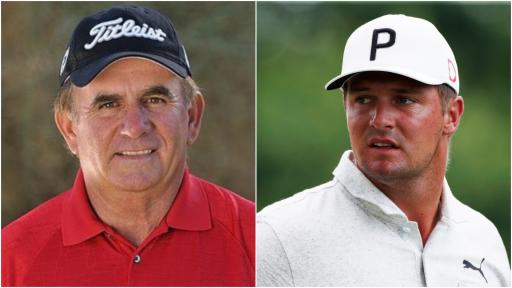 Peter Kostis has taken a stab at Bryson DeChambeau on Twitter during Sunday's final round of the US Open at Winged Foot.

Since being sacked by CBS last year, the former broadcaster and golf analyst has used Twitter a lot more freely and certainly hasn't been afraid to say exactly what he thinks, no matter who it is about.

DeChambeau has been slammed for his slow play antics in the past and although he has definitely sped up his game in certain areas, he is still one of the slower players on the PGA Tour, due to his in-depth thought process before each shot.

Playing alongside Matthew Wolff in the final round of the US Open on Sunday, DeChambeau started the day two shots behind the youngster, before going on to beat him by six.

Although DeChambeau's name wasn't mentioned in the tweet, it was pretty obvious to golf fans that Kostis was saying that Wolff's poor final round was partly down to playing in the same group as DeChambeau.

The tweet received mixed opinions from Kostis' followers, some backing his point and other defending DeChambeau.

"There’s absolutely no evidence to suggest Bryson is one of the slowest playing Tour players. Anchoring bias from that one 8-footer he took two minutes to hit," said one golf fan.

"I just watched an entire NFL football game that went over 3 hours, and tune in to see the lead group only to 13.. this is why golf cannot grow with the masses.. the slow play is just ridiculous," said another.

"100% I was worried about Matt today, old mates slow play and constant overreactions will wear anyone down. Dude audibly whinges about a 40 footer missing, just finish putting and move on."

"Have they lost a hole to the game ahead? If not, then I don't think it's an issue. If it was, they would be put on the clock. He's on course to win his first major, and he's playing well. I say, give him a break and let him play."

NEXT PAGE: Bryson DeChambeau CONFIRMS he will test 48-INCH driver...