Phil Mickelson has paid tribute to Arnold Palmer in the first video of his new 'Tribute Tuesday' videos. 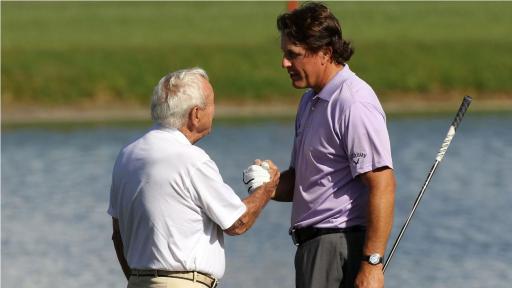 Phil Mickelson has only had a Twitter accoint for just over a year, but he has quickly become one of the most popular golfers to follow on the social media platform. He does his best to respond to tweets sent to him by fans and we have also been treated to some brilliant content from the PGA Tour veteran, including his 'Phireside with Phil' stories. Well Mickelson has now added another content idea to his page, known as 'Tribute Tuesdays' and who better to start with than Arnold Palmer, who would have turned 90 on Tuesday.

Mickelson is a humble guy but especially over the latter stages of his career, as he now admits that he would never had reached the boundaries of his success if it wasn't for the supports of hundreds of people who he has crossed paths with throughout his life.

“I want to take every Tuesday to give a small tribute to those who have meant so much to me,” Mickelson said, “and I can’t think of a better person to start Tribute Tuesday than Arnold Palmer, today, on his 90th birthday."

Check out Mickelson's tribute to Palmer below:

I’m starting Tribute Tuesday to thank the many people in my life who have had an impact on me and my family. I could not have the many special moments and opportunities without these amazing people and this is my way to say thank you. pic.twitter.com/QbEfuM5wwd

Mickelson was keen to highlight a moment in particular that has always stood in the back of his mind, at the 1994 US Open at Oakmont, what was Palmer's last US Open, when Palmer stayed behind for two hours following his practice round, to shake and thank all of the volunteers for their hard work.

“Little gestures like that always stood in the back of my mind about what a great man he was because he was so appreciative of all the things that people have done for him and have given him,” said Mickelson.

Equipment news
New Shot Scope user dashboard to help golfers improve by managing their data
US PGA
Has Tiger Woods just created a new nickname for Jordan Spieth?
PGA Tour
Phil Mickelson's Mum: "Not too many people recognise him"
Golf news
Rules of Golf: How many shots does this player take with bizarre chip technique?
US PGA
David Duval BLASTS Phil Mickelson: "Be man enough to stand up..."