Peter Crouch provides the biggest laughs of the early session when playing with junior golf clubs... 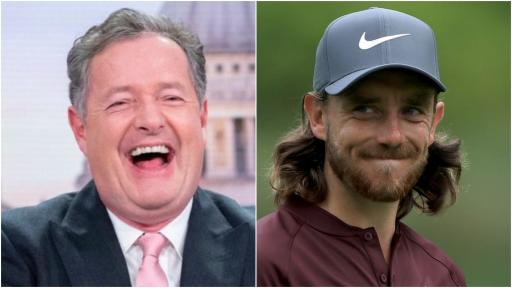 Piers Morgan claims he "carried" Tommy Fleetwood to team victory during the first part of the Paddy Power Golf Shootout at Centurion Club on Friday, while Peter Crouch provided the biggest laughs when playing with junior golf clubs.

The challenge tournament, taking part with all social distancing measures in place, was contested by Tour pros Fleetwood, Paul McGinley, Andrew 'Beef' Johnston, Thomas Bjorn and Carly Booth, as well as celebrities Morgan, Crouch, Freddie Flintoff, Harry Kane and Jamie Redknapp - the latter who ended up taking individual honours in the shootout having started as an 18/1 shot.

Morgan and Fleetwood won the first session of play, but of course the Good Morning Britain host could not help but take personal credit for the early victory.

Catch up on the highlights from Part One of the Paddy Power Golf Shootout. #PPGolf

A very gracious @piersmorgan makes his victory speech after himself and @TommyFleetwood1 were victorious in Part One of the Paddy Power Golf Shootout #PPGolf pic.twitter.com/Jj9JHnqhGi

"It was a team, me and Tommy Fleetwood, but as Tommy himself admitted I carried him," said Morgan.

"I won most of the challenges for the team. Tommy did contribute, don't get me wrong, he's a good player, but in the end it came down to mental strength and resilience, no fear, and looking at people like Andrew 'Beef' Johnston straight in the eye and watching them blink, a bit like when Mike Tyson fought Michael Spinks - and 90 seconds later, it was all over."

He added: "I think overall, quality came to the fore, no pun intended. As Muhammad Ali said, if you are going to talk the talk, then you've got walk the walk."

Some of the biggest laughs of the day came from Crouch when he was seen using junior golf clubs. It really was a sight to behold - check out Crouch in action below...

Would you like to see @petercrouch playing golf with a child's club? Of course you would #PPGolf pic.twitter.com/XtJk2wKMmm

Morgan also fell off his chair, much to the delight of Flintoff...

When all was said and done, however, it was 18/1 shot Redknapp who came out on top as the individual shootout challenge winner...

Catch up on the Highlights from Part 2 of the Paddy Power Golf Challenge.

READ ABOUT ALL THE ACTION HERE