Prince Andrew has been stripped of his patron roles at Royal County Down, Royal Belfast and Open venue Royal Portrush. 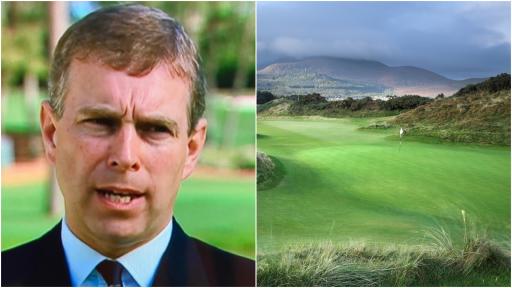 Prince Andrew has lost his honorary patron roles at three of the greatest golf clubs in Ireland and Northern Ireland, according to a report on ITV News.

The Queen's move to strip the Duke of York of both his military roles and royal patronages on Thursday - as a result of his civil sexual assault case - has now seen him lose his honours at Royal County Down and Royal Belfast in Northern Ireland, as well as Royal Portrush in Ireland.

The latter of which hosted the 2019 Open Championship. It was at this particular tournament which Prince Andrew infuriated members of the public when he took a £16,000 flight on the taxpayers' dime to watch the action.

Shane Lowry lifted the Claret Jug that week and the Duke, now 61, insisted he had no other means to get there and was a spectator as part of his patronage.

"There will be immense relief by members that this decision has been taken out of their hands," said a source close to the trio of golf clubs.

Just had it confirmed from a spokesperson at The Royal and Ancient Golf Club that Prince Andrew "remains an honorary member but doesn't carry out any active duties on behalf of the club."

Prince Andrew is facing a court showdown after a judge ruled on Wednesday that Virginia Giuffre’s lawsuit against him could go ahead.

Among the honorary positions he held in Northern Ireland were patronages of the three prestigious golf clubs.

A spokesperson for The Royal and Ancient Golf Club confirmed to GolfMagic last night that Prince Andrew "remains an honorary member but doesn't carry out any active duties on behalf of the club."

A statement from Buckingham Palace regarding The Duke of York: pic.twitter.com/OCeSqzCP38

Some golf clubs had already severed ties with the Duke of York years ago, while other clubs decided to remove pictures of him from their clubhouses.

In May last year it was reported that more than 50 charities had severed ties with him.

Of those that had already removed the Duke as patron included the Berkshire County Cricket Club, the Whitgift School in Croydon and the Golf Foundation.

NEXT PAGE: BRYSON DECHAMBEAU ON WHY HE REFUSED TO TAKE PART IN PGA TOUR'S NEW NETFLIX SERIES