Rory on Bryson: "He's turned his living room into a golf lab"

McIlroy admits he is "impressed" with what DeChambeau is doing in the game right now... 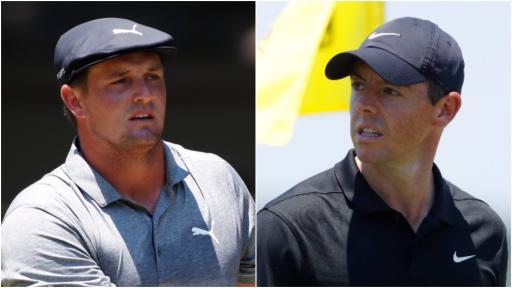 Rory McIlroy admits he is "impressed" at Bryson DeChambeau's new-found distance ahead of this week's Memorial Tournament.

McIlroy was quizzed on his thoughts about DeChambeau's body transformation and his meteoric rise to the top of the PGA Tour's driving distance stats.

"I've seen the videos that Bryson has been putting up, and he looks like he's turned his living room into a golf laboratory, but look, he's doing what he believes is the right path forward for him," said McIlroy.

"Look length is -- we're here at Jack Nicklaus's golf course, and Jack was the longest in his day, and it was a massive advantage, right. Length will always be an advantage in golf. It's just the way it is.

"What he's doing is very impressive. He always had speed. I remember playing with Bryson back in 2016 in Abu Dhabi. It was a sponsor's invite. I think he might have just turned pro, and he had speed back then. I mean, when he wanted to, he could hit it long.

"He's maybe put on a little bit, but I even -- at Portrush last year I think it was right in the infancy of this journey he's been on, looking at the -- they have the tracker on the range, and his ball speeds were up in the 190s then. So he's always had the speed.

"Maybe the mass that he's put on has helped him get a little bit more, but I don't -- I'd love to see what speeds he could get without him putting on the 40 pounds or whatever it is that he's put on.

"But look, more power to him. He's making golf interesting, and he's certainly getting people to talk about him, and look, he's already won. He's won already, and he's played some good events and been in contention, so it's working for him."