Rory McIlroy won the Driving Relief charity skins match at the 19th hole as a nearest-the-pin contest was needed to settle the game. 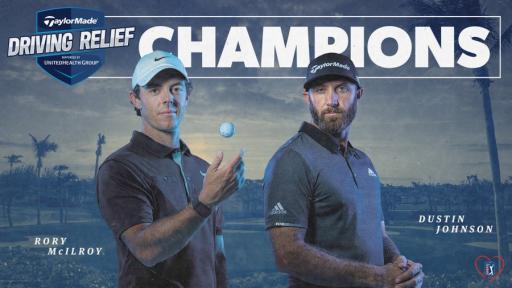 Rory McIlroy and Dustin Johnson beat Rickie Fowler and Matthew Wolff as live golf returned to our televisions for the first time since The Players Championship was cancelled back in March.

The results from today's match that matter most. #DrivingRelief pic.twitter.com/4jZeF4jfRV

The skins match needed a 19th hole to settle the victor and McIlroy stepped up to the plate to win the nearest-the-pin challenge and the final skin worth $1.1 million.

As expected, there were a few signs of rust from the four players who haven't played a round of competitive golf since the first round at TPC Sawgrass, with both teams making a few mistakes here and there.

RELATED: Rory McIlroy CHUNKS chip shot and laughs it off

It certainly made unusual viewing, watching some of the best golfers on the planet carry their own bags like mere mortals and listen to them analyse their game whilst wearing microphones.

The banter between the four players was enjoyable and added a much needed element to the game, as watching Fowler role in a 20ft putt to win a hole without the sound of cheering spectators felt a little wrong.

McIlroy and Johnson, who many backed as the favourites for the match, took an early lead through the first six holes, but after both Fowler and Wolff birdied the ninth for $300,000 the tables turned.

The final six holes were tied which left a whopping $1.1 million to be won via a nearest-the-pin contest as all four players went back to the 17th hole, a short 120-yard par-3.

It seemed a simple shot but with the winds blowing at Seminole Golf Club, it proved a tough task, with both Fowler and Johnson missing the green.

Wolff set a good target as he stepped up first to land it around 15ft from the hole, but the World No.1 was able to rise to the challenge as he put his wedge shot pin-high and 12ft from the pin to clinch victory.

It came down to the final shot.@McIlroyRory and @DJohnsonPGA win the Taylormade #DrivingRelief and $1,850,000 charitable dollars for COVID-19 relief efforts! pic.twitter.com/WIF9JHZvQC