WATCH: Rory McIlroy proves that even the World No.1 can be rusty... 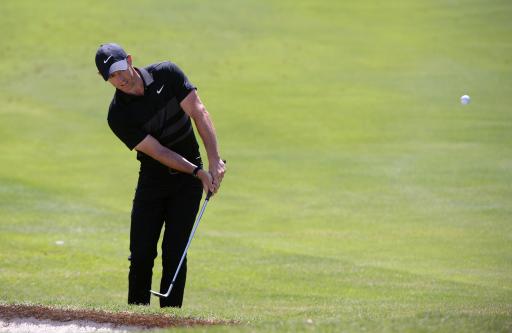 Rory McIlroy might be the best player in the world right now, but even he has to dust off some cobwebs when he hasn't played competitive golf since the first round of The Players back in March.

The World No.1 is currently playing in the TaylorMade Driving Relief skins match, teaming up with Dustin Johnson as they take on Rickie Fowler and Matthew Wolff, raising over $3 million for American nurses.

During the coronavirus lockdown, McIlroy admitted that he was struggling to find the motivation to practice as he felt a "lack of purpose" without any competitive golf.

A few weeks ago, the fire in McIlroy's belly returned and he told Sky Sports that he was readying himself for the return of golf, as the PGA Tour plans to start again at the Charles Schwab Challenge in June.

McIlroy's lack of practice over the last few weeks hasn't stopped him from hitting bombs off the tee during the TaylorMade Driving Relief match but he did show some signs of rust as he uncharacteristically fluffed a chip from the edge of the green.

With golf courses in England reopening their doors following the government's latest guidelines, I'm sure there are thousands of golfers who chunked a few chips during their first round back on the course and will appreciate McIlroy's slight error.

Amateur golfers across England will probably be feeling very rusty having been out of action for a while, but the good news is golf coaching is once again permitted in England with immediate effect, according to the UK government.

The coaching, for now at least during the coronavirus lockdown, must only be one-to-one instruction, and it must be outdoors with correct social distancing measures in places at all times.