Is Rory McIlroy bulking up like Bryson DeChambeau during golf off-season? 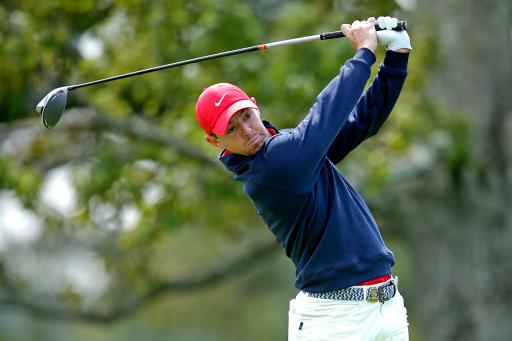 Rory McIlroy might already be one of the biggest hitters on the PGA Tour, but judging by his latest post on his Instagram Story over the weekend, it would appear the Northern Irishman is ready to close the distance gap between himself and the circuit's leader Bryson DeChambeau.

McIlroy, who averaged 314 yards off the tee on the PGA Tour last season (some 10 yards less on average than DeChambeau), posted his latest driving numbers on Instagram, first going to a 340-yard carry and then two days later taking it up to 357 yards! He even captioned his post with "Speed szn". Check it out below...

As you can see from the photos above, McIlroy's latest numbers with his TaylorMade SIM driver look out of this world with a 340-yard carry and 186 mph ball speed, before improving on that further to 357 yards and 190 mph.

We can't be certain McIlroy has been drinking seven protein shakes a day like Bryson, but what we do know is that he is clearly keeping his foot on the gas to increase his distance during his PGA Tour off-season in a bid to keep up with the new US Open champion.

When DeChambeau won his maiden major title at Winged Foot three weeks ago, McIlroy said: "I think he’s taken advantage of where the game is at the minute. I’m not saying that’s right or wrong. He’s just taking advantage of what we have right now."

McIlroy is next scheduled to play on the PGA Tour in next week's CJ Cup, before playing in the ZOZO Championship.

The World No.4 will then look to complete golf's career grand slam with a first win at The Masters from November 12 to 15.