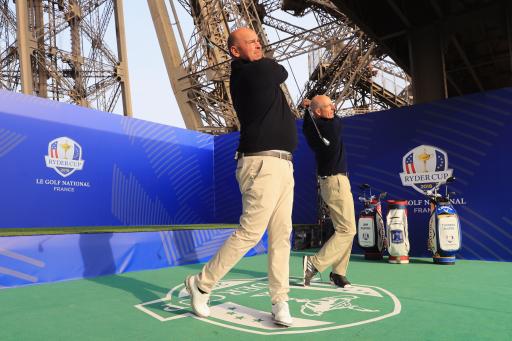 Ryder Cup captains Thomas Bjorn and Jim Furyk recreated an iconic shot from the Eiffel Tower, 41 years after Arnold Palmer did so.

The duo, promoting next year’s competition at Paris’ Le Golf National, hit balls from the first floor towards the Champs de Mars.

Palmer, who passed away last year, teed off from the famous landmark on 14 October 1967, and was the first player to ever do so.

The King’s golf bag was alongside the skippers, as they celebrated a year to go until the famous biennial clash.

Bjørn said: “It feels like we have had a long list of unique experiences these past two days, but hitting balls off the Eiffel Tower was pretty special. I saw that picture of Arnold Palmer a while ago, and so to recreate that for the Ryder Cup, and for France, shows how big the Ryder Cup is and how France is really getting behind it.

“It was an amazing experience for Jim and me. It’s going to take a while to sink in, and every time you see that photograph now it will remind you. It will stick with you for the rest of your golfing career.”

Previously, the Dane and American joined French President Emmanuel Macron at the Palais de L’Elsee for breakfast, presenting him with a special Ryder Cup golf bag.

Furyk said: “There is only one Arnold Palmer, but it was an honour for Thomas and I to be part of this, hitting balls from the Eiffel Tower, and everything else we have done.  France has really rolled out the red carpet for us, so I must thank Ryder Cup Europe and everyone involved.

“We had dinner at the Palace of Versailles last night, we had breakfast with the President this morning and now we’ve hit a golf shot from the Eiffel Tower. It’s incredible. I’m pinching myself – it seems a bit storybook, but it shows how big The Ryder Cup is and how important it is to a country like France to showcase how beautiful this country is and how wonderful Paris is.”

I’m not sure tomorrow’s breakfast can trump what happened this morning! A real honour to meet Emmanuel Macron @RyderCupEurope pic.twitter.com/lTHis8C9cZ

Previous
Sun Mountain reveal extensive bag range for 2018
Next
What's your WEDGE rating? Answer these questions to find out...