Seven-year-old gets hole-in-one on first outing

Freddy Sage got the ace on a 100-yard par-three hole at Knebworth Golf Club, Hertfordshire. 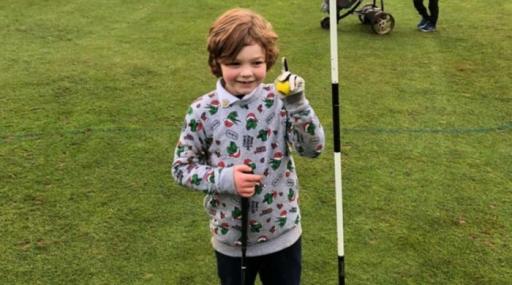 A seven-year-old English golfer got a hole-in-one on his first outing on the golf course recently.

"It wasn’t just one of those flukey things," the club pro Gary Parker said. "He hit it straight off the tee and it was a proper golfing shot."

The youngster is part of the club’s academy and had been playing for 12 weeks, although this was his first test on the course.

"I was in shock, really," said Ian Parker, the pro coaching the group at the time. "I was helping another kid out and I just looked up and saw it happen. It was a beautiful shot. It climbed in the air and bounced once or twice and then just went straight in.

"Everyone was doing aeroplanes down the fairway to celebrate – it was fantastic."