Gary Player went on a rant about conservation and treelined golf courses during the Payne's Valley Cup. 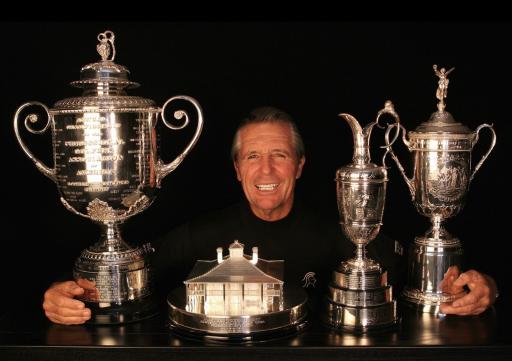 Golf fans were left feeling very confused on social media after Gary Player went on a bizarre rant during the Payne's Valley Cup about conservation and the importance of having more trees on golf courses.

During the match, Player - who has won nine majors and 160 tournaments during his career - stepped into the broadcast booth where he was asked whether he was more proud of his career record or his achievements as a golf course architect.

The 84-year-old then went on a rant about conservation and how the best courses in the world are all treelined (has he forgotten that St. Andrews exists?). Watch Player's rant in the video below:

Gary Player goes off on golf courses cutting down trees. Apparently he hasn't seen old aerials of many of his favorite courses. pic.twitter.com/1Z4enZh0y2

"The other thing that is driving me crazy, my brother went to war to fight for the Americans when he was 17 years of age," said Player. "And he became one of the world's leading conservationists. And he was a tree-hugger, the same way that I am. I am a tree-hugger.

"And I'm seeing trees on golf courses today that were 80 years old and they're slicing them down by some city slicker. They should be fined for doing this. All the great golf courses of the world—Augusta, Pine Valley, Royal Melbourne, one of Jack's courses at Muirfield [Village], one of Jack's most beautiful courses—they're treelined.

"It's nonsense to be cutting all these treelines. It's unfair. Worry about the Amazon cutting down the trees, and we're contributing to the same effect. For goodness sakes, stop cutting them down and plant more. If you don't know how to get a golf cousrse with great shape, brush up on your knowledge. Because I can tell you, all the great golf courses of the world were treelined, around the greens and around the fairways."

It didn't take long for Player's speech to become the talk of the town on Twitter.

@NoLayingUp I’m so glad we got a 5 minute lesson on conservation from Gary Player who, by his own admission 30 seconds prior, has burned more airline fuel than any man in history.

1. TREES
2. “I’ve traveled more miles than anyone ever”
3. “I would have won more majors if I lived here”

God help us if Gary Player learns about clouds. pic.twitter.com/22G0MUkdsR

I mean I thought Gary Player had no clue about course design.... but that absurd rant has all but confirmed what I thought... if he’d had wanted to save some trees he could have just not built any of the monstrosities he proclaims to be golf courses