The original TaylorMade Burner from 2007 was one of the most popular drivers the brand has ever released and it made its way into the hands of the global superstar as he shot a music video on a golf course. 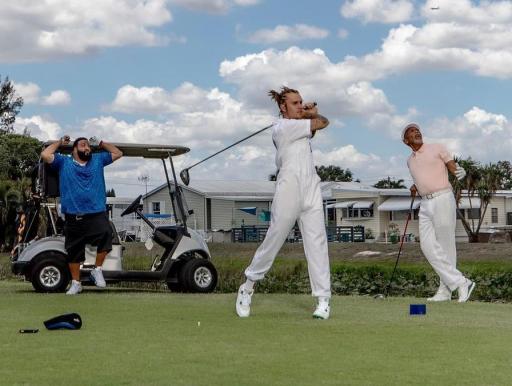 Golf fans have reacted to images on social media of global star Justin Bieber using the iconic TaylorMade Burner driver from 2007, during a recent shooting of a music video at a Miami golf course.

Bieber was seen alongside DJ Khaled and 21 Savage as they shot the music video for the song Let It Go and if you're someone who has a problem with hoodies on the golf course, then the Canadian's attire will certainly bother you.

The pop star was wearing a Toronto Maples Leafs jersey with baggy jean shorts, Jordan sneakers, a few chains around his neck, whilst rocking a rather questionable hairstyle.

Luckily for some golf fans, Bieber won't be wearing his outfit on the PGA or European Tour any time soon, so Tyrrell Hatton will remain the rebel of the golf world, in the eyes of golf's dinosaurs.

Bieber and Khalid were seen racing around in customised golf carts, that had been designed to look like luxury sports cars, but it was Bieber's choice of driver that caught the eye of golf fans on social media.

The TaylorMade Burner from 2007 was the first of its kind and quickly became one of the most popular drivers amongst amateur golfers, thanks to its SuperFast technology which reduced club weight and promoted faster swing speed for increased distance.

The driver's advanced bullet-shaped clubhead was something that golfers absolutely loved, which became a pioneer in the importance of CG location in a driver.

Images of Bieber using the famous TaylorMade driver were posted on social media by Skratch, causing golf fans to respond in the comments.

I just replaced my ‘07 Burner last month. Loved that driver! I’ll hold on to it as my trusty back-up. Keep hitting em long and straight Justin!

One of the best line of clubs made by well.. anyone

I still hit my burner 5 wood, best feel ever. They need to revive that series @TaylorMadeGolf

I’m still crushing my drives with the 07 Burner

NEXT PAGE: Rory McIlroy plummets to his WORST world ranking since 2009