Tiger Woods: being a Dad has helped him stay focused on his recovery

Tiger Woods "lives for" his children Charlie and Sam as the former World No.1 eyes a return to the PGA Tour. 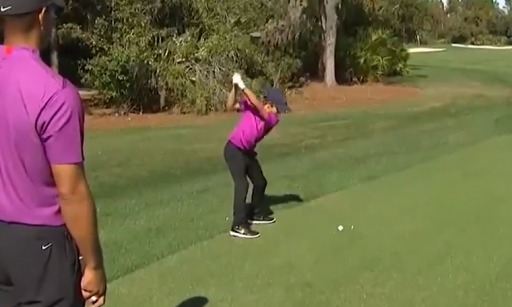 Tiger Woods' children Charlie Woods and Sam Woods have helped push the former World No.1 through recovery from his horror car crash in February, according to an article in PEOPLE.

A source tells the publication that Woods, 45, "lives for" his daughter Sam, 14, and son Charlie, 12, who he has brought up with his ex-wife Elin Nordegren.

"Being a dad has helped him stay focused on his recovery," the source tells PEOPLE.

"At times, it's been very difficult for him both physically and mentally.

"His leg injuries caused him extreme pain. He is a fighter and has been determined to get better though.

"He has worked very hard in physical therapy. He has had an incredible recovery."

EXCLUSIVE: OLYMPIC GOLF PHYSIO WOULD BE "ASTOUNDED" IF TIGER WOODS PLAYS IN THE 2022 MASTERS

Despite images and a video emerging of Woods seemingly to be walking without crutches on the golf course, while watching Charlie in a junior golf tournament over the weekend, Olympic Golf and Premier League Football physio Poora Singh told GolfMagic today that he would be shocked if the 15-time major champion appeared at The Masters in April.

But Singh tells us that if anyone can do it in the world of sport, then it's Tiger Woods.

"He will want to be competitive. People forget and think he will be back from his injury and he will be ready to go. No, it doesn’t work like that.

RELATED: TIGER WOODS NET WORTH WILL BLOW YOUR MIND!

"It’s not because the injury has taken so long to recover, that’s usually 10 to 12 weeks. You’re looking at them coming back to being competitively world-class.

"That could take years to get there. Luckily what they've got is the fact that they’ve been there, the brain knows how to function like that. They’ve got the innate talent, they’ve got the ability anyway and stuff like this helps you to get up to a competitive level.

"That’s where I think the key part of rehab comes in, where you’re doing enough to be competitive but not enough to hurt yourself."

RELATED: WHO IS TIGER WOODS' GIRLFRIEND AND ARE THEY STILL TOGETHER FOLLOWING HIS CAR CRASH?

An "insider" has also told PEOPLE that Woods has a timeframe in line to make it back onto the PGA Tour.

"Tiger has made a remarkable recovery in the past few months, but it's even more significant lately," the source reportedly told the publication.

"It's like every day he can do more, he can handle more, the pain is less and he's feeling better."

RELATED: TIGER WOODS' SON CHARLIE WOODS IS A HUGE PRICE TO WIN A MAJOR BEFORE THE AGE OF 25!

The insider added: "He says that the pain is very manageable now. For the first couple months, he'd just be sitting at home with his leg up, and it would be throbbing and he'd be in so much pain.

"Now he still has pain, but it's nothing like what he dealt with before. He's feeling strong and healthy and optimistic that he'll be able to return to tour.

"He's got a timeframe in his head, but he's not really putting that out there; he knows when he wants to return, and he's going to make it happen.

"He says even if he's not at 100 per cent, he knows how important it is to get back out there and compete. That's his goal."

Tiger Woods
PGA tour
bryson dechambeau
car crash
American golf
Previous
THIS is the best driver of 2021....Or is it? Best Golf Driver 2021
Next
Was this player penalised for this EXTRAORDINARY double-hit?