"I'd be ASTOUNDED if Tiger Woods makes The Masters": Olympic Osteopath Exclusive

After receiving another Tiger Woods update, Poora Singh, a top osteopath from the Edgbaston Performance Clinic, would be very surprised to see the 15-time major champion at Augusta National. 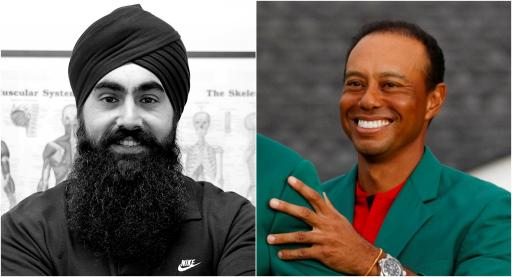 Top osteopath and sports therapist Poora Singh admitted that he would be astounded if Tiger Woods was to be playing competitive golf in April, the month of The Masters.

Woods was involved in a serious car accident in Ranchos Palos Verdes, Los Angeles in February where he had to be pulled from the wreckage. He required surgery on open leg fractures and injuries to his feet and ankles.

Golf fans have received gradual updates of the 15-time major winner's progress throughout 2021. Promisingly, he was recently videoed standing and walking unaided while watching his son play golf.

Singh is the lead therapist for the Challenge Tour and he also works on the Race to Dubai Physio Unit. Not only does he tend to golfers across Europe, but he has also worked with Team GB at the last two Olympic games.

RELATED: TIGER WOODS IS WALKING WITHOUT CRUTCHES ON THE GOLF COURSE!

"He will want to be competitive. People forget and think he will be back from his injury and he will be ready to go. No, it doesn’t work like that.

"It’s not because the injury has taken so long to recover, that’s usually 10 to 12 weeks. You’re looking at them coming back to being competitively world-class.

"That could take years to get there. Luckily what they've got is the fact that they’ve been there, the brain knows how to function like that. They’ve got the innate talent, they’ve got the ability anyway and stuff like this helps you to get up to a competitive level.

"That’s where I think the key part of rehab comes in, where you’re doing enough to be competitive but not enough to hurt yourself."

As an osteopath, Singh focuses on manual healthcare which is used to treat and diagnose medical conditions. Techniques such as massage, articulation and stretching are used to treat the cause of pain.

Also a clinic director at the Edgbaston Performance Clinic, Singh works with Aston Villa and Birmingham City football clubs, as well as being a sports therapist for the Yafai brothers in the world of boxing.

Like all of us, Singh is a golf fan and he believes if there was a golfer who could return to his former glories after such extensive surgery, then it would be Tiger.

"I think it’s very good progress, let’s be honest. To have a rod put in and to have pins put in, they are all extensive injuries. More than anything, what concerns me is the foot," Singh added.

RELATED: WHO IS TIGER WOODS' GIRLFRIEND AND ARE THEY STILL TOGETHER AFTER CAR CRASH?

"The foot is a hard area to bring back from these kinds of injuries. But if he is walking unaided and he looked good to be fair, there wasn’t a hobble there.

"If he is doing that then all he has to do is continue loading it and then start to put into play the kind of movements and forces he wants to put through his golf swing. If one man can do it, it is him.

"The amount of surgery that he has had over the years and the sort of surgeries that he has had, and then to come back, he is very resilient. Also, Tiger Woods has got access to the best doctors and physical therapists in the world, he has a lot of options."

Before the most recent sightings of the 82-time PGA Tour winner where he is unaided in his movement, we had only seen images of him on crutches and still in the thick of his rehabilitation.

We must remember, as Singh importantly points out, there is a difference between being able to walk and being able to play four rounds of competitive golf on the PGA Tour.

Of course, the 45-year-old Woods has sensationally defied the restrictions of his injured and ageing body before, need I mention the 2019 Masters.

But to save ourselves from disappointment, it may be wise to lower our expectations on when Woods will be back. His mindset and competitive edge suggest he certainly will be back, but it will likely be later rather than sooner.

"Let’s break it down. You’ve got to go from a point from where the bone didn’t even have any joints and then being bonded. And then once it’s bonded, you have to start to put natural human force through it, which is like walking or walking upstairs," Singh explained.

"But imagine even trying to do a jog or a run. Those are all natural forces so he has to get to that point first. Then, you have to start putting the forces of golf through it as well. For him, that is going to be massive.

"It’s going to be forces that have to be put through initially to get the bone to be happy with the force that it is taking, and the joint.

"After that, you need him to become competitive and world-class. I wouldn’t want to rush back from this sort of injury - I would want to take a slow and steady approach to it."

NEXT PAGE: TIGER WOODS IN LINE FOR $8 MILLION FROM PGA TOUR AFTER CAR CRASH RULED HIM OUT