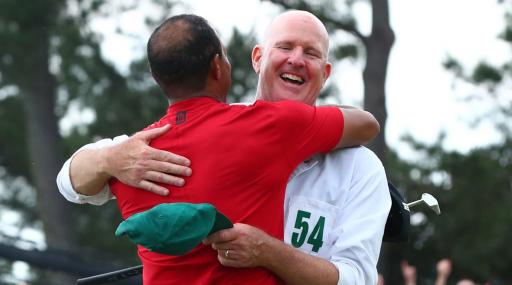 Tiger Woods has heaped praise on his caddie and good friend Joe LaCava after he was named the latest inductee into the Caddie Hall of Fame, a honour offered by the Western Golf Association which operates this week's BMW Championship.

Woods, 43, took to social media on Wednesday evening to thank LaCava, the man who he joined forces with back in 2011 following a previous partnership with Dustin Johnson.

"A Hall of Fame career, a great and trusted friend and one of the best in the business. Thanks Joey and congratulations," wrote Woods on social media.

‪A Hall of Fame career, a great and trusted friend and one of the best in the business. Thanks Joey and congratulations! ‬

LaCava, 55, chose to stick by Woods through thick and thin, never looking to find a new bag even when Woods was going through his difficulties on and off the course.

The duo enjoyed their greatest win together when Woods won his 15th major title at the 2019 Masters in April, marking his first major victory since the 2008 US Open.

But it was Phil Mickelson's former bagman and now on-course commentator Jim 'Bones' Mackay, inducted in 2017, who pushed LaCava to accept the invitation.

“I was hesitant about doing it, but Bones said, ‘You’ve got to do it.’ And I respect Bones obviously, so once he said you should do it, I was all in.”

LaCava has caddied on the PGA Tour for the best part of three decades, picking up the bag of not only Woods and Johnson, but other star names including Fred Couples, Davis Love III and Justin Leonard.

While proud of his latest accolade in the game, LaCava doesn't enjoy being in the public eye a great deal.

“I’m just not comfortable with the attention,” said LaCava.

“I’ve always been a guy who, I want Tiger to be the show. I want him doing the interviews and everything else. So that’s just not a comfortable role for me, but I think it’s terrific that they’re doing it and that they thought that much of me to do it.”