US Winter Olympic gold medallist Chloe Kim is currently enjoying her golf and she sent a statement to Tiger Woods off the back of her progress. 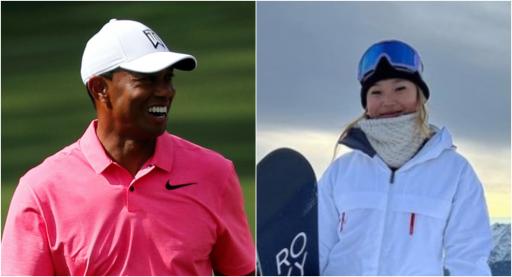 Kim revealed to TIME that she and her boyfriend, who is former professional snowboarder Evan Berle, have been playing golf together recently.

RELATED: WHY TIGER WOODS WILL NEVER EVER COMPETE IN THE SAUDI INTERNATIONAL

She said she has grown strong interest and ability for the game, so she sent a message to one of the best players to have walked the earth.

"My boyfriend’s a big golfer, and we kind of started going together, and I’m kind of like talented at it. Like, I don’t know any golfers, but like Tiger Woods needs to watch himself," Kim comically said.

WATCH: "GOLF GUYS ARE WHERE IT'S AT... THEY'RE NOT TAKING HOME A DIFFERENT CHICK EVERY NIGHT"

It would be unlikely that the 21-year-old develops any type of golf career in the near future due to her flourishing snowboarding record at such a young age.

At the 2018 Winter Olympics in Pyeongchang, she became the youngest woman to win an Olympic snowboarding gold medal in the halfpipe discipline. She was just 17 years old.

She is a six-time X Games gold medallist and she is also a world champion and a two-time champion at the Youth Olympic Games.

Kim is part of what is being described as one of America's best-ever snowboarding teams to return to the Winter Olympics, which begins this week in Beijing.

It is fair to say that Kim's attention will purely be on China this week. Her aspirations to become a golfer will have to be put on hold for now.