On his debut at the Dubai Desert Classic 16 years ago, Rory McIlroy snuck inside the ropes to watch Tiger Woods play in the first round. 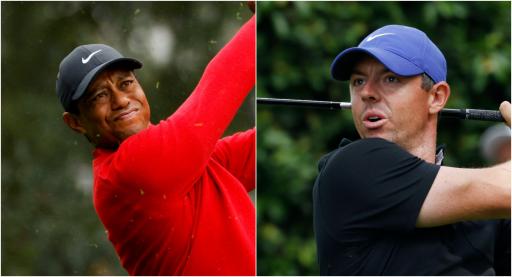 Even if you are a top player on the PGA or DP World Tours, you will never be immune to becoming weak at the knees in the presence of Tiger Woods.

Back in 2006, Tiger competed at the Dubai Desert Classic on what used to be the European Tour. That year, Woods won eight times in 15 events including The Open Championship and the PGA Championship.

These two victories, part of his total of 15 major championships, came in a string of seven consecutive wins throughout the year.

2006 was when Woods was essentially at his best. And he kicked it off at the Dubai Desert Classic in February when Rory McIlroy made his debut at the event.

RELATED: EX-ROYAL COP WOULD HAVE "KNOCKED OUT" PRINCE ANDREW OVER GOLF BALL CLAIMS

A 16-year-old McIlroy shot a 72 in the first round on Thursday, an impressive effort from such a young golfer. Afterwards, practice was the last thing on his mind.

"I remember I played on Thursday morning, and then on Thursday afternoon Tiger was playing," McIlroy said when reminiscing in 2012.

"I came out in the afternoon and took one of the photographer's cameras off of him and was able to follow inside the ropes, which was pretty cool.

"That was my first real taste of Dubai, and I've been coming back every year since."

McIlroy, 32, also recalled his memories from the tournament before he finished third at the 2022 renewal.

"Tiger hit a five-iron out of the right rough on 10 and landed on the green and stopped it on the green. And to this day it was one of the best golf shots I've ever seen. Just sticks out in my mind and I was right there for it," he said.

In the morning, McIlroy was a competitor. In the afternoon, he was a fanboy. Unfortunately, the Northern Irishman missed the cut with another 72 on day two.

He lived everyone's dream of being inside the ropes and watching Tiger. But now, the four-time major champion has made his dreams a reality.

He has 14 wins on the DP World Tour, including two wins at the Dubai Desert Classic. Woods won his first and only title at the event in that memorable year.

NEXT PAGE: TIGER WOODS ON HIS MEDIA COVERAGE: "THEY'VE CREATED A CHARACTER"