Tiger Woods shares a story about the time he was punched in a hotel by Muhammad Ali. 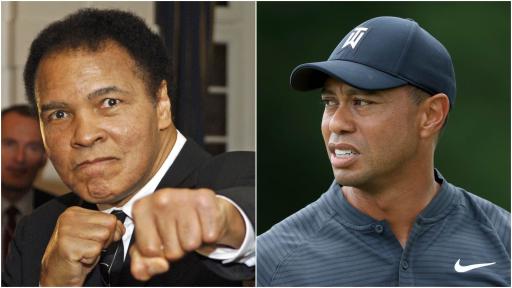 With the European and PGA Tour on halt and multiple countries around the world in lockdown, we've heard some pretty interesting stories from some of our favourite golfers lately and now Tiger Woods has shared a memory of his past.

The 15-time major champion recently shared a story while being interviewed by Golf Digest, about a time he was left feeling "so p*ssed" when he was punched in the ribs by the one-and-only Muhammad Ali.

Woods was checking into a hotel for a practice round before the 2004 US Open at Shinnecock Hills, when he felt a jab to the ribs and it made him so angry he was ready to turn around and hit the culprit, but when he turned around, he saw a familiar face.

"OK, well, I've met him [Ali] on several occasions. But this is when I went for a practice at Shinnecock. The year that Goose [Retief Goosen] won out there," said Woods.

"I checked into a hotel, I believe it is where the Hiltons live, and so I'm checking in and I just have my backpack and literally my golf clubs.

"I'm just going up there for a day trip or stay the night and get up early the next morning and go play golf.

"I'm in line at the front desk and I get hit in the ribs, my right ribs. And it hurt.

"And I whip around and I’m thinking I'm just going to hit somebody. I was so pi**ed.

"I look around and it’s Muhammad Ali.

"I said, ‘Why did you have to give me a love tap that hard?'

"He was old but it still hurt. And I just can't imagine being hit in a ring for 15 rounds like they used to fight back in the day. It’s just crazy."

Asked whether he thought about landing Ali with a punch of his own, Woods said: "No, no, no, no. I was going to lose that one!"

latest golf news
Tiger Woods
tiger woods news
muhammah ali
Previous
Butch Harmon: Tiger Woods is an arrogant "pr**k!"
Next
How are YOU coping without any golf during lockdown?