Tony Finau relishing break away from the USA

Tony Finau is loving his time on the European Tour and admits it's nice to get a break from the USA. 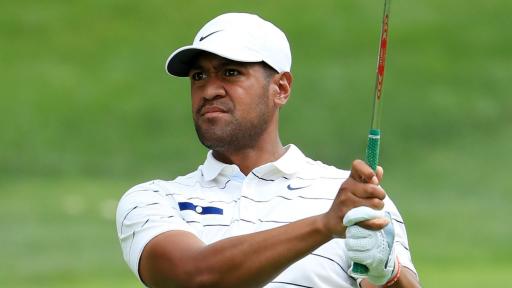 Tony Finau is one of the most exciting players on Tour right now and he's proved to be popular with the fans, in both his home country and in the United Kingdom. The big-hitting American made his debut in the BMW PGA Championship last week, getting off to a fantastic start over the first two days, before letting it slip over the weekend.

This week, Finau is once again playing on the European Tour, this time in Scotland, where he will tee it up at the Alfred Dunhill Links Championship, his second appearance at the tournament.

Finau, who only has one win on the PGA Tour, spoke to the media ahead of this week's tournament and made it clear that he is loving his time in the UK and the break away from the United States.

"It's been great," said Finau. "The people have been great. It's nice to get away from the states and experience some different golf courses, culture, people. It's been a lot of fun for me."

Asked about the different feel and format of the tournament this week, Finau had nothing but praise for the event and was excited with members in his group.

"I enjoy it a lot. It's relatable to our AT&T Pebble Beach back in the States. I really like this event. After coming last year, the golf courses are hard to beat. As long as the conditions stay okay, I really enjoy my time here.

"Yeah, we've got a good one [group], Justin Timberlake and Justin Rose. Play a lot of golf with Rose. Never played with Justin Timberlake. That will be a cool thing for me. I'm a huge In Sync fan growing up. It's going to be fun to get to know him better and his golf game."

Finau also had high praise for the quality of courses in Scotland and had an obvious favourite out of the three he will be playing this week.

"Kingsbarns is my favourite. It's my favourite links course in the world after playing it last year. I couldn't believe how good the views were and how good the golf course was. I would definitely have to say Kingsbarns. I would have to go Carnoustie and then St. Andrews. I love St. Andrews, but if I was going off pure setup, I would go with those three."