Tony Finau showed off his power whilst testing the new PING G425 driver. 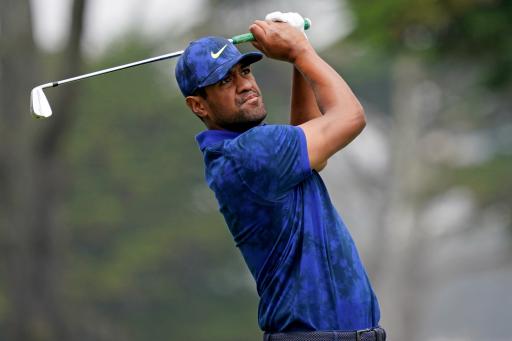 Tony Finau posted a video on his Instagram page showing off his raw power from the tee whilst testing the new PING G425 driver.

Finau returns to action this week for the first time since a T8 finish at the US Open at Winged Foot and the fan-favourite will be hopeful of finally adding a second PGA Tour title to his resume this season.

The World No.17 was scheduled to play in the Shriners Hospitals for Children Open earlier this month, but was forced to withdraw after testing positive for the coronavirus.

After spending the appropiate time self-isolating, Finau has now recovered from the virus and has been preparing for this week's action at Sherwood Country Club, where a stellar field will be competing in the ZOZO Championship.

Finau has always been one of the PGA Tour's biggest hitters and last season the 31-year-old finished 13th in the driving distance statistics, with an average drive of 309.8 yards.

The interesting thing about Finau's distance is that he actually possesses the power to hit the ball a lot further than he does, as he swings with a very short backswing compared to other players on the PGA Tour.

In Finau's Instagram post, he revealed that having the coronavirus took it out of him, but he's now feeling fit and ready to return to action. Watch the video below as Finau rips a drive with the new PING G425 driver:

Back to work! Test driving this new PING G425 Covid-19 got me pretty good not even gonna front. Excited to be back playing the game I love Thanks for the support throughout the recovery. I'm healthy and ready to get back to it #teamfinau #letsgetit @zozochamp

Is that a slightly longer backswing I see? It certainly looks like it. Perhaps Finau has been working on getting a little more out of his driver by extending his backswing a touch more and it seems to do the trick in the video.

Finau recorded a ball speed of 190mph, which is the number that Bryson DeChambeau has been regularly achieving since his transformation, plus a carry of 329 yards.

It will be interesting to see if Finau does start to go at it a little harder from the tee, so make sure you tune in to all the action this week at the ZOZO Championship.

NEXT PAGE: What time you can watch the ZOZO Championship live in the UK