Topgolf Chief Brand Officer Geoff Cottrill believes that Topgolf is part of a significant shift in the golf world that has inspired more participation both on and off the golf course. 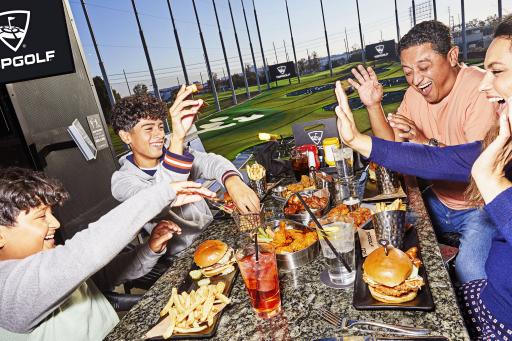 "The game of golf is in the midst of its biggest change ever" were the passionate words of Topgolf's Chief Brand Officer Geoff Cottrill as the popular company's new 'Come Play Around' campaign takes off.

Speaking exclusively to GolfMagic, Cottrill discussed Topgolf's new initiative which aims to promote inclusivity by producing a number of different videos with the sport's most popular influencers.

Topgolf boasts over 70 venues in five different countries and in 2020, one billion balls were hit at Topgolf venues. The fun, interactive experience has caught the imagination of golfers who are just beginning their careers or established players who want something different.

The brand brought on board notable sports personalities such as Erin Andrews, Charissa Thompson and Kelly Stafford as well as social media influencers Snappy Gilmore and Coach Rusty to promote the campaign.

Described as Topgolf's "largest-ever global integrated brand campaign," Cottrill believes Topgolf has played a crucial part in the changing attitudes towards a sport that is steeped in tradition and could be seen to be stuck in tradition too.

"I think it's great. We've set out to bring this idea of play to the world. We live in a world that sometimes has been busy and stressful and the older you get, the more the world seems to conspire against you, in terms of telling you how to act," Cottrill said.

"Golf can be intimidating, golf historically has been an exclusive sport (and) not everyone's been welcome. I think the invitation was there, but I think the access points have been blocked sometimes.

"Our whole idea is to bring more play to the world, but to also open doors and invite people into the game of golf. And an idea of someone's first experience with golf at a Topgolf (venue) with music and laughter - just having fun.

"We want to offer that to people and I believe the game of golf is in the midst of its biggest change ever. You're starting to see a lot more people and a lot more diversity coming into the game.

"There's this sense of inclusion coming into the game, the game is changing and you're seeing a lot of new brands emerging, coming up and changing the aesthetic and the fashion.

As well as a number of popular social media figures being involved in Topgolf's campaign, European golf legend Annika Sorenstam also features in the campaign videos.

Cottrill was mesmerised by Sorenstam who allegedly showed off her trick shot skills by juggling a golf ball off camera. In 2021, Topgolf and Callaway completed their merger after an initial announcement in 2020 and the 10-time major champion is also a Callaway ambassador.

It seems the company never rests as it prepares to open venues in Wichita, Kansas and Vineyard, Utah. The new venue in Glasgow is also due to open in December.

Also last year, the NGF reported that 75% of golfers who attended a Topgolf venue were interested in playing an 18-hole course and 29% of golfers went on to play more traditional golf.

These statistics would answer the question surrounding concepts such as Topgolf cannibalising the sport and keeping golfers off the fairways and in the bays. But Cottrill believes the very opposite is taking place.

"I think there's a lot of landmarks in our timeline. They're happening every day, we've got the 2K23 game which is a big moment. We're also part of Golf Plus which is the number one virtual reality game which is a very interesting place for us to learn," he added.

"But we're also opening new venues in new markets in places where we've never been before. We opened in Louisville, Kentucky, we're opening in Glasgow in a matter of weeks.

"The study was published a couple of weeks ago and Topgolf has been playing a pretty big role in what the idea of off-course golf could be. I think years ago, there was a concern about whether it was an 'either or'. Is one cannibalising the other? But that's not the case.

"What we're seeing is the whole pie is just getting a lot bigger and that off-course golf is actually feeding new players into the game of golf, the green grass side of golf.