Tour pro has clubs stolen, misses the cut then pays an even BIGGER price

This was a forgettable week to say the least for this young tour pro. 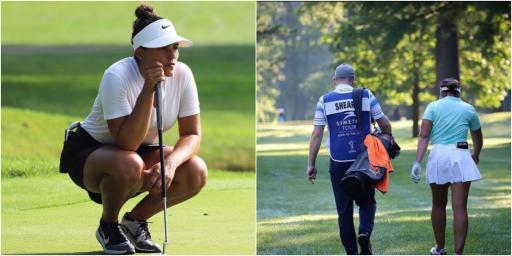 If you've not made it to the elite tours then life as a professional golfer is as gruelling and mentally tough as any other job.

Self-doubt, the cost of travel and not knowing where the next paycheque is going to come from all creep into your mind.

Which makes it all the more annoying when some moron steals your clubs out the back of your car just before you play a tournament.

Her clubs were reportedly left in the back of her Nissan Armada but she later came back to her car to find shards of glass everywhere.

RELATED: IS THIS THE WORST RYDER CUP HECKLE OF ALL TIME?

Sheary's clubs, her tour bag stuffed with rain gear and other essentials were taken in what was described as an 'upmarket' area.

She reportedly called her insurance company and she was told to buy replacements and keep the receipts.

Luckily she was helped out by some kind-hearted pros also on the circuit who left clubs for her in the pro-shop.

Sheary then cobbled together a set from a pawn shop and borrowed a driver from another pro who had an earlier tee time.

To make matters worse, Sheary then went onto miss the cut and it took her six days to get the window in her car replaced.

Reportedly, Sheary found out she could only get $750 from her insurance company to replace the clubs.

That was because she was technially on a "business trip" and her clubs were specified as "tools of her trade".

She was quoted as saying the sentimental value of the clubs was almost as high as the true cost of the clubs.

Sheary told Golfweek despite the bad week, she left the club with a smile on her face thanks to the kindness of her fellow pros.