lukeafkfan will be wishing that he didn't bother playing golf in his own house as it led to a catastrophic ending. 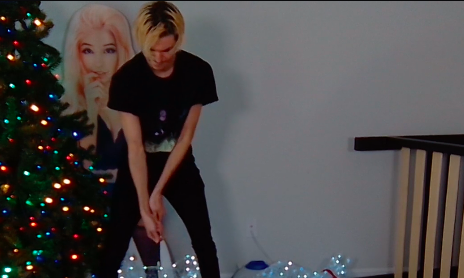 Sometimes, people's love for golf gets the better of them and incidents can occur. This often happens when people attempt to play golf indoors.

Unfortunately, one streamer on Twitch learned this the hard way as he inadvertently smashed his own television, worth $3,000, with a golf ball.

lukeafkfan, who has 138,000 subscribers on Twitch, was challenged by a streamer to hit the model reindeer with the shot. This explains why the room was laid out in this way.

He pulled the club back and the head got caught in the large Christmas tree behind him. He managed to get the club loose from the branches, but he will be wishing now that he didn't. You can watch the video here.

He brought the club forward and hit the ball. It rebounded backwards off the bannisters and hit his television. This is when pandemonium began.

The popular broadcaster started shouting in shock that his multi-thousand-pound television had been smashed. As you can see in the video above, serious damage was done to the screen.

As he lifted the camera to the television, many of his fans watched on and left comments, some mocking the streamer. In all fairness, I think most viewers will have chuckled to themselves.

We have seen many videos like this on social media where golf has gone wrong before and unfortunately for this aspiring golfer, he was the latest victim of bad luck.

If he tries to hit the reindeer again, we hope that he will protect his valuable possessions beforehand next time.

NEXT PAGE: TIGER WOODS IS USING A NEW TAYLORMADE DRIVER AT THE PNC CHAMPIONSHIP