Hosung Choi has divided opinion on Twitter after he let go of his driver and struck his playing partner. 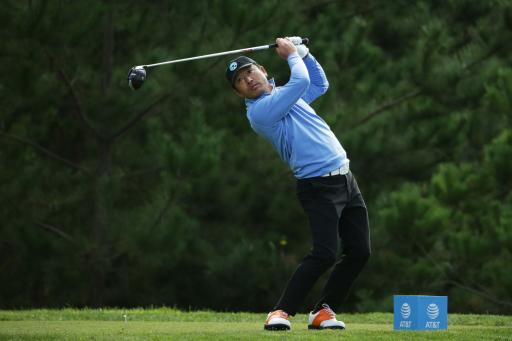 Hosung Choi certainly attracts attention wherever he goes, with his unique playing style and bizarre follow throughs, he's caught the eye of golf fans all over the world, but this time it's for the wrong reasons.

Last week, Choi was playing in the Singapore Open where he shot a 72 and a 74 and missed the cut, but during Friday's second round he managed to make some headlines.

The 43-year-old was paired with Rikuya Hoshino and Viraj Madappa for his opening two rounds and it's safe to say he got on the wrong side of Madappa during their second round.

Choi was last to take his tee shot and after hitting his drive, his unorthodox follow-through caused him to let go of his driver, which flew towards Madappa and struck him on the leg. Watch it for yourself below:

Madappa was clearly irritated with Choi and made his gestured towards the South Korean, who didn't really seem to care too much.

A video of the incident was posted on Twitter and the majority of golf fans felt that Choi got off lightly.

"Bang out of order! Surprised the guy in black didn't just chuck it in the lake!" said one account.

"Whatever made golf a great game in the past is pretty much gone with idiots like this!"

RELATED: Hosung Choi - the man with the CRAZIEST golf swing

"That twig would have ended up in two pieces if I was the guy in black."

"I’m not an advocate of violence but if the guy who got hit by the club decided to drop him I’d have no problem with that."

"Ho Sung Choi at his finest."

"Guy should’ve stomped his shaft after that. What a clown."

"I would snap that around his neck."

NEXT PAGE: Gleneagles golf shops gets RAIDED for thousands of pounds