Is Tyrrell Hatton's EPIC CLUB THROW the most relatable golf clip of the year?

Golf fans relate to Tyrrell Hatton as he launches his club during the CJ Cup. 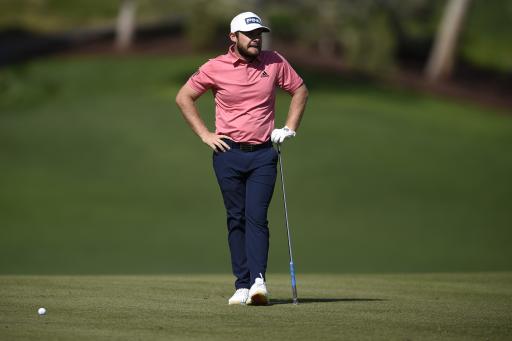 Tyrrell Hatton may have produced the most relatable moment for amateur golfers so far this season, after his hilarious club throw at the CJ Cupow Creek started doing the rounds on social media.

The Englishman recently won the BMW PGA Championship, the European Tour's flagship event and it caused a widespread debate due to the fact that he wore an adidas golf hoodie every day.

RELATED: Tyrrell Hatton speaks out on hoodie debate: "I don't see the issue"

Hatton has proved over the past year that he is one of the most in-form players on both tours right now and the World No.9 didn't let jetlag affect his performance in Las Vegas, finishing in a tie for third and raking in $565,500 in the process.

The 29-year-old is known for his brilliant personality and having interviewed Hatton in the past, we know he's a great character to be around, hence why his popularity has grown in the United States this year.

We don't always applaud professional golfers for having a strop on the course, especially if it's led to a club throw, but the manner in which Hatton pulled this one off during the CJ Cup was most definitely entertaining. Watch Hatton's club throw in the video below:

The simple flick of the wrists to send his club twirling through the air was quite brilliant to watch and it certainly caused a stir amongst golf fans on social media when the PGA Tour posted a video of the incident.

Agree, the way he aggressively throws the club is outrageous. Not in the slighting bit comic or entertaining. He and his hoodies should be banned from golf for all eternity!!! Look at us Alan, bonding like a couple of old fellas. Golf purists!

It's interesting who the media chooses to like or dislike. Don't get me wrong I like Hatton and we need guys like him he's pretty damn funny, but if Bryson did this people would chew him apart

His form on the club flip was phenomenal

Textbook club throw. Always throw it the direction you have to walk.

Me after EVERY Shot lol

NEXT PAGE: Tyrrell Hatton gets UNIQUE RULING in a bunker during CJ Cup due to Jon Rahm