Tyson Fury hitting it as far as Bryson DeChambeau as he looks to build his power ahead of Dillian Whyte fight. 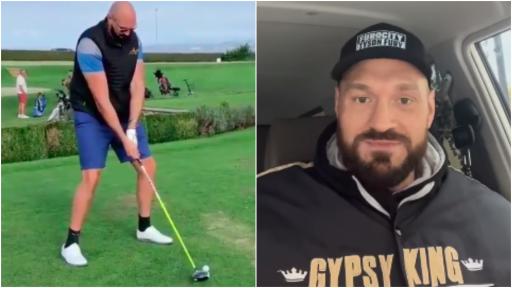 World Heavyweight Boxing champion Tyson Fury admits he has been smashing golf balls "400 yards" in a bid to build his power ahead of his upcoming fight with Dillian Whyte.

Fury, a keen golfer in his spare time down in Morecambe, will defend his title for the second time on Saturday April 23 in front of a record-breaking 94,000 crowd at Wembley Arena.

And in preparation for the big fight, Fury admits he has been spending plenty of time on the driving range ripping golf balls like Bryson DeChambeau in a bid to get even more prepared for taking Whyte in the ring.

“I've been playing a lot of golf in Morecambe, with trainer SugarHill, to prepare for this fight," he told reporters at a virtual press conference last night. “And that has really improved my right hand and putting my shoulder really into my shots.

“I'm driving the ball around 400 yards and I think it really has helped. I hit around 200 balls a day as part of my training, we do loads of different things to spice things up. We've had a lot of fun in camp. It's not like I'm going to the guillotine – it's damn, I'm going to be on TV!"

Fury is a heavy favourite to beat Whyte on April 23.

"To all the fans. I see you, I hear you and I appreciate you," Fury captioned his latest Instagram video post.

"The countdown is on and I cannot wait to put on a historic performance for you come Saturday!"