A golf coach and rules expert revealed how many shots Donald Trump actually took in a video that shows him cheating. 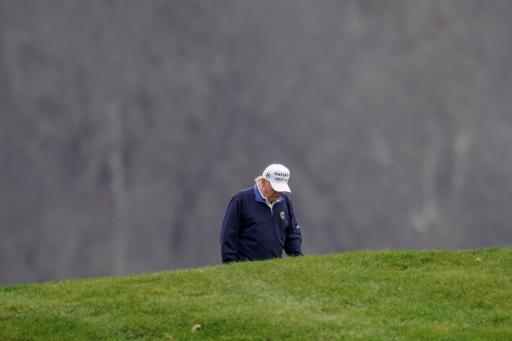 Donald Trump's love affair with golf often made headlines and usually for the wrong reasons and now an old clip of him cheating at the sport he loves so much has been used to help golfers understand the rules of golf a little more.

The Golf Rules Questions Instagram page is extremely popular for golfers, as it shows a range of scenarios that occur on the golf course - some unique, some common - and reveals the ruling that applies to each situation.

In one of the latest videos, a clip of Trump playing golf has been used where he is caught on camera cheating, but how many shots should it count for? Find out by taking a look at the post below...

WATCH TRUMP CHEATING IN THE VIDEO BELOW:

Now of course Trump most likely put down a birdie for the hole, but here's how many shots he actually took on the green.

The video received comments from golf fans, some with follow up questions to the ruling and others took the opportunity to make some Trump jokes.

"4 strokes even after he demands a recount," said one golf fan.

"You would think he would be better considering he spent so much time golfing instead of being a president," said another.

An absolutely hilarious impression of Trump and his putting antics was posted on the Long Drivers Instagram page, which is definitely worth a watch.

WATCH THE BRILLIANT IMPRESSION OF TRUMP BELOW

A player must not make a stroke at a moving ball:

- If a ball that has come to rest is wobbling (sometimes referred to as oscillating) but stays on or returns to its original spot, it is treated as being at rest and is not a moving ball.

In stroke play, a stroke made in breach of this Rule counts and the player gets two penalty strokes.

NEXT PAGE: Your golf ball hits a bird and goes OUT OF BOUNDS, but what's the ruling?