Golf practice in the garden went horribly wrong for this poor lad... 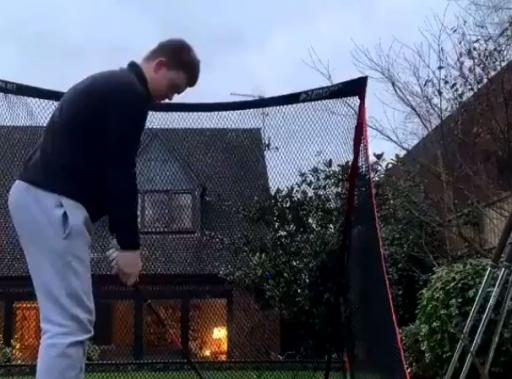 A video has gone viral on social media after a boy ended up putting a hole through one of his sliding doors when his golf ball flew through his practice next and straight into a window.

We've all been doing what we can to keep our swings in shape while golf courses have been closed in England and we now have just a week to go until we can get back out on the course.

Some golfers have been working on their chipping by buying chipping nets for the garden, some have worked on their putting by using training aids such as the popular PuttOUT mats and others have gone and bought practice nets so they can take full swings and keep their iron game in good shape.

The latter is what Rory was doing before his garden nightmare occurred. Now whether his family are as mad on golf as he is we don't know, perhaps he was named after Rory McIlroy or maybe his parents just like the name.

Either way, it's safe to say Rory's mum probably likes golf a lot less after her son put a hole through one of her sliding glass doors.

WATCH THE GARDEN PRACTICE NIGHTMARE BELOW:

The NOISE that it makes

Now although the incident didn't occur due to a poor shot from Rory, something we see in these types of videos a lot, I do question what on earth he was thinking setting the net up so that he was hitting balls towards his house in the first place.

Rory's got a cracking swing on him and I'm sure he can't wait to get back out on the golf course like the rest of us, but let's just hope he's still got a home to return to when he does...