There's a touch of the 'Hungry Hippos' about this one! 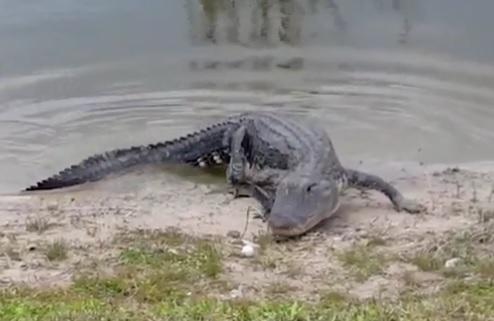 Florida resident Dan McNamara was playing the third hole at Long Marsh Golf Course in Florida on Saturday when his golf partner got quite the surprise!

The man he was playing golf with hit the ball toward a lake where an alligator was waiting. McNamara told ABC News that he shanked the ball over the green and it rolled right next to the gator.

"I was shocked that this guy turned and looked at me, he ate my buddy's golf ball."

The gator grabs the ball with his jaws and sneaks back into the water almost as if he's saying "finders keepers!"

It's the second week running when an alligator has made news on the golf course, following PGA Tour player Cody Gribble slapping the tail of an alligator and putting him back in the lake at Bay Hill!

Golfer Cody Gribble and THAT alligator; round 2 by GolfMagic