WATCH: Ball embeds into side of the cup, but is it a hole-in-one?

A hole-in-one is one of the most sought after achievements in golf, but have you ever seen something as lucky as the golfer in this footage? 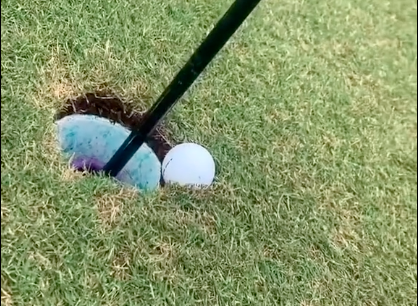 Most amateur golfers can only dream of playing in or even winning a major championship. But they can realistically expect to have a hole-in-one in their lifetime.

A hole-in-one doesn't need to be a perfect shot, it just needs to be good enough to land near the hole and then luck takes over.

Some people can go through life and have four or five hole-in-ones, but then you have people like me who have never been close and are still looking for the glory.

The person in the footage below appears to still be looking for the glory. Have you ever seen a more unlucky outcome than in this video?

RELATED: PGA TOUR: ROUND 1 AND ROUND 2 TEE TIMES FOR THE SONY OPEN

The player has hit almost the perfect shot but the ball has embedded into the edge of the hole. It is one hell of a pitch mark they have made, but how has the ball not dropped into the cup?

It may be that the ball was rolling towards the pin and had settled in a hole on the edge of the precipice. I'm not sure if I could step back on a golf course after a situation like this.

Golf fans left their comments on the amazing incident:

"My golf courses intermediate cut better than that green," one fan said.

"Is that hole in the rough?" one fan commented.

RELATED: DWYANE WADE DID NOT WATCH THE TIGER WOODS DOCUMENTARY, HERE'S WHY

"Should win nearest the pin money," another fan said.

"Been there, done that!!! It sucks!!" another fan commented.

NEXT PAGE: TOM WATSON JOINS NICKLAUS AND PLAYER AT THE MASTERS AS HONORARY STARTER