Tom Watson will now be part of the great tradition on the first morning of The Masters where he will hit a tee shot alongside Jack Nicklaus and Gary Player. 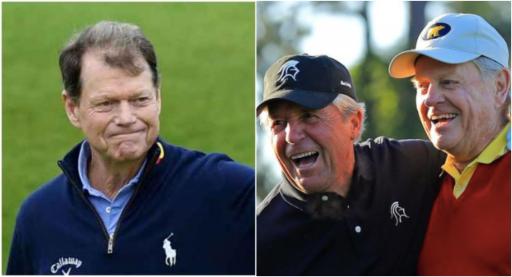 Tom Watson will join Jack Nicklaus and Gary Player as an honorary starter on the first morning of The Masters in April.

In 2021, Lee Elder joined Nicklaus and Player as part of the tournament's opening ceremony but sadly, Elder died back in November at the age of 87.

Watson, who won The Masters in 1977 and 1981, shared many battles with his two legendary friends over the years who have nine green jackets between them.

"I am greatly honoured to join my friends and fellow competitors, Jack and Gary," said Watson.

I'm delighted that Chairman Ridley has invited @TomWatsonPGA to join @GaryPlayer and me as Honorary Starters for @TheMasters Tournament. Tom, like Gary, is one of my closest friends and has a storied history at Augusta National. Trust me, I know—the hard way. I'm excited for him! pic.twitter.com/XK7NzQTKpk

"In both of my victories, Jack was on my heels. And when Gary won his third tournament in 1978, I was there to help him put on the Green Jacket.

"Moments like those stand out in my career, and the opportunity to share the honorary starter tradition with Jack, Gary and the Masters patrons will be very special.

"Augusta National in April is one of my favourite places to be, with many fond memories of both watching The Masters as a youngster and then competing in the tournament for so many years."

RELATED: PGA TOUR: ROUND 1 AND ROUND 2 TEE TIMES FOR THE SONY OPEN

Watson, 72, also finished second three times at the tournament. The most iconic win of his career arguably came at Turnberry in 1977 when he beat the Golden Bear in The Open Championship, a day that became known as the 'Duel in the Sun'.

The opening ceremony of The Masters has always been a highlight of the event at Augusta National. Arnold Palmer used to take part with Nicklaus and Player until his death in 2016.

NEXT PAGE: TOP 5 PUBLIC GOLF COURSES IN ENGLAND YOU NEED TO PLAY IN 2022

The Masters
Tom Watson
Augusta National
Gary Player
Jack Nicklaus
Previous
PGA Tour: Round 1 and Round 2 Tee Times for the Sony Open
Next
WATCH: Ball embeds into side of the cup, but is it a hole-in-one?