WATCH: Could you play the Phil Mickelson BACKWARD FLOP SHOT like this?

This golfer channels his inner Phil Mickelson and hits an amazing flop shot back over his head. 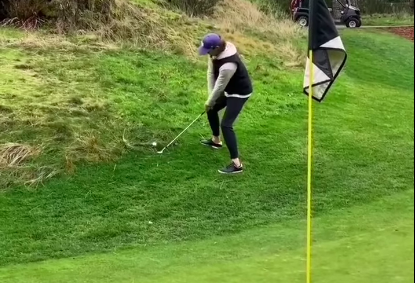 Come on, admit it. We have all tried the backwards flop shot at some point. Whether it is on the practice ground or during a social round on the course, we have all tried it.

But there are very few people who can say that they have successfully executed it, myself being one. That shot is for the most talented players in the game.

Six-time major champion and the oldest ever major winner Phil Mickelson first introduced this shot to us earlier in his career. He once said in a video tutorial that he played this shot during the AT&T Pebble Beach Pro-Am.

The shot almost defies belief. You need the perfect lie and perfect slope so that your wedge can slide underneath the ball to bring it back over your head.

Lefty is a master of the short game, so it is no wonder that he is able to perfect this shot. However, not only legends of the game can pull it off.

As you can see in the video above, this golfer is determined to hit the backward flop shot and he has found the perfect slope for it.

A lefty himself too, he takes a big swing and connects perfectly with the ball. It flies high in the air and lands softly by the hole.

The player was very casually dressed, so he must have been playing a practice round. It would be great to see footage of someone taking on this shot in a competition.

RELATED: ENTERTAINING? DISAPPOINTING? GOLF FANS GIVE THEIR VERDICT ON THE MATCH

"Who else blading it into the lovely house on the right?" one fan said.

"Cute, but I could have gotten it closer by putting it," one fan commented.

"Dude's that good, and he's in the rough?" another fan commented.

"I’d hit that rock and then my face!" one fan said.

NEXT PAGE: "WHERE'S THIS ON PGA TOUR?!" BRYSON DECHAMBEAU SLAMS BROOKS KOEPKA AT THE MATCH