Future Broadcaster? Phil Mickelson steals the show at The Match

Phil Mickelson shared the commentary booth during The Match with Charles Barkley and he was the star of the show. 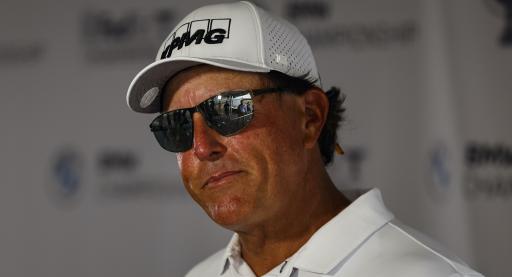 And in some respects it was. Koepka played some fantastic golf and comprehensively beat DeChambeau 4&3 at The Wynn Golf Club, which looked to satisfy him very much.

But many golf fans would agree that the star of the show was neither of the competitors, but the six-time major winning Lefty in the commentary booth.

Phil Mickelson was always going to add entertainment and personality to the broadcast and he didn't disappoint. For every edition of The Match now, he has been a vital part of its growing popularity.

RELATED: ENTERTAINING? DISAPPOINTING? GOLF FANS GIVE THEIR VERDICT ON THE MATCH

On the first hole, Mickelson asked DeChambeau: "Do you feel that hitting bombs like that is attractive, makes you feel physically more attractive?"

"Oh, very, it's hot," DeChambeau replied. Mickelson concurred and so on the first hole, the 51-year-old set the tone for what sort of comments and jokes were to come over the next 11 holes.

But Mickelson provided great insight too. With a putt that Koepka set up for himself, Mickelson analysed the colour of the green and he could read the contour of the putt by focusing on this one feature.

"Darkness, look at the darkness of the grain there. That's going to kick it to his right, that's where the grain is going first. You can see it moving to his right and then it straightens out," Lefty explained as Koepka rolled in yet another putt.

The four-time major winner reciprocated Mickelson's call. Koepka and DeChambeau were listening to the commentary booth through Airpods in their ears.

The Match is a unique entity that has emerged in the game. It has mixed the sports of golf, NBA and NFL and Mickelson slots perfectly into any place where he can relate to any athlete and talk to them about anything.

This feature of his personality made him and Barkley a good fit in the studio. 12 months ago, the pair beat the NFL's Peyton Manning and the NBA's Steph Curry in another edition of The Match.

Mickelson commented on DeChambeau's choice to wear a pink shirt, doubting whether he could pull it off himself. The 45-time PGA Tour winner was a constant source of energy throughout, which is arguably more than you could say for the competitors.

Not to wish a legend of the game away into a career in the gantry, as he became golf's oldest major winner this year and he has a lot to give on the PGA Champions Tour too.

But it is clear that Mickelson has the confidence, articulation, knowledge and personality to succeed in a broadcasting role whenever he hangs up his golf shoes.