Entertaining? Disappointing? Golf fans give their verdict on The Match

The long-anticipated Match was decisively won by Brooks Koepka, but was it an enjoyable watch for golf fans at home? 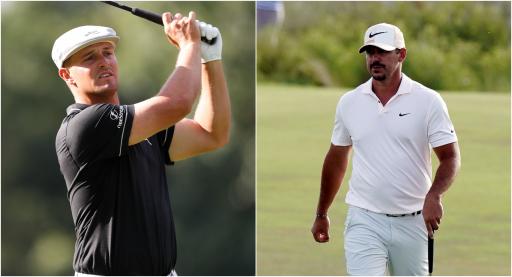 We have now seen five editions of The Match and the showdown between Brooks Koepka and Bryson DeChambeau was arguably the one people were the most excited for.

The feud between the American pair ignited the public interest in 2021, but by the time each player teed off at The Wynn Golf Club yesterday, most golf fans were tired of it.

But whether there was genuine tension or if both golfers just stoked the fire for their own publicity benefit, it was great to see them settle it on the course and there were fun moments during The Match last night.

Phil Mickelson, who shared the commentary booth with NBA legend Charles Barkley, predicted that DeChambeau would win. As Koepka surged ahead he said to Lefty: "How you feeling about your prediction right now?"

When Koepka went dormie four up in Las Vegas, Dechambeau said: "Where was this on the PGA Tour?" So there were moments of entertainment and the engagement we all wanted, with Koepka also admitting to being impressed by DeChambeau's long game.

However, there will have been many golf fans who did not tune in to a minute of last night's broadcast, as the nature of the event didn't appeal to every golf fan and every demographic.

There were criticisms aimed at the course itself and also the production of The Match. There were also suggestions that the players barely conversed and that the pairs format of previous years works better.

So all in all a mixed bag of opinions which is what you see below with the following fans tweets:

The match wasn’t close, the audio was all over the place, the course was a joke, and the players didn’t really engage… Yet it was still a few of the most entertaining hours of TV golf this year. Fun for hardcore fans and casual fans alike.

The Match continues to deliver.

My wife, who doesn’t play golf but does know the game, watched & laughed for 2 hours (while scrolling on her phone), but specifically noted “this course is offensive, it doesn’t look real, looks like an amusement park compared to anything else I’ve seen.” #theFaz

Love you all and agree most of time. Barely remembered it was happening, tuned in, then tuned out. Phil was great, although yammering during pre-shot seemed a bit much. Chuck was good. The golf, production, etc was less than captivating.

It’s so much better when everyone relaxes and they don’t take it too serious. “Settle the score” or “rivalry” is just lame. I think team match play is the best route as well. Just get some personalities who are natural on camera (JT would be great).

It was literally the least entertaining few hours of golf I've seen this year, and most definitely the most boring "The Match" yet. 2 personality-less guys should've been playing the hardest golf course on the planet. Not some gorgeous resort course in Vegas.

5 matches in and they still haven’t figured out that they need under card matches and better personalities to pull this off.

Honestly this one fell a little flat for me. The audio was often really hard to follow, the drone shots made me feel like I was on a rollercoaster in a bad way, and it lost quite a bit of what makes it great without amateurs who mess up and the team aspect.

PGA tour
bryson dechambeau
brooks koepka
the match
phil mickelson
Previous
Brooks Koepka wins The Match with a DECISIVE victory over Bryson DeChambeau
Next
Joburg Open reduced to 54 holes by DP World Tour, but should it be cancelled?