Dustin then poses an amusing question to the official. 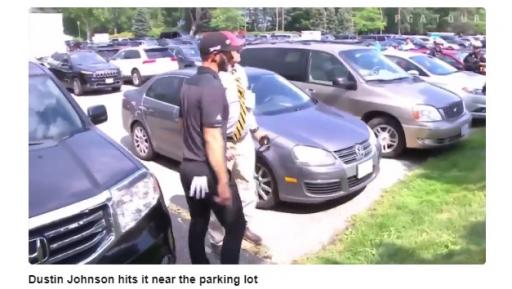 Dustin Johnson launched a drive so far left off the 10th tee in his opening round of the Canadian Open that he ended up right beside a car in the parking lot.

Play was suspended due to lightning just as Johnson got to take relief away from the vehicle, but the delay did not come before the world number one asked a rather amusing question about a potential alternative.

"Can I have that car moved?" said Johnson.

From the parking lot?"Can I have that car moved? We got enough people."-@DJohnsonPGA pic.twitter.com/P3AYy4mHp7— PGA TOUR (@PGATOUR) July 27, 2017

I know what you're thinking. Is a car a movable obstruction?

Yes, if the car can be moved with undue delay. If the owner of the vehicle was right there, or could be found quickly. Rule 24-1, in case you were wondering.

Parking lots coming into play is not a foreign concept in golf. Seve Ballesteros famously got up-and-down for birdie from a parking lot on his way to victory at the 1979 Open Championship...