WATCH: Golfer clatters ball off a tree and into someones car!

You could say this golfer was unlucky to have hit the car in this situation, but lucky that the owner didn't retaliate in a violent fashion... 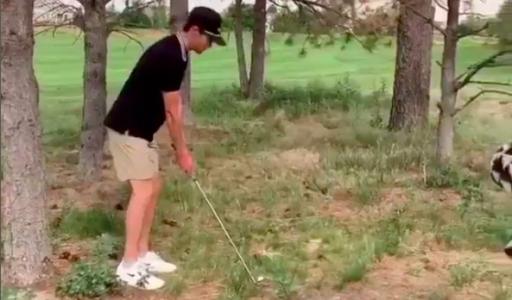 Every golfer has been stuck in a tough spot in the trees and tried to take on the great escape shot, but only special players from the PGA Tour are capable of pulling them off.

We have seen miraculous recoveries from players such as Phil Mickelson and Seve Ballesteros in the past. Their escapology expertise made them icons on the tour.

You need a little bit of luck and a whole lot of skill to fully recover from the trees and unfortunately for one young man, he possessed neither.

As you can see in the footage below, the player has a difficult shot. He is trying to thread his ball through the eye of a needle and back out on to the fairway.

A bad shot here would just mean hitting the tree or duffing the ball a few yards. What happened next was completely unexpected.

Related: "Phil Mickelson will be back!": Rory McIlroy on PGA Tour legend's mistake

The golfer's ball did in fact hit the tree, but it rebounded several yards in the opposite direction to where he and his playing partners were stood.

You can't see the ball bounce, but you can hear it as it clatters the tree and fires backwards into someone's garage. And you can hear the ball connect with the car.

The owner of the car was standing by the vehicle when the ball collided with it. Luckily for the golfer, he stood motionless and took mercy on him.

The golfer apologised for his errant shot. I think it's fair to say he needed to take a provisional after this mishap.

Maybe when this young man finds himself in the trees next time, he will check his surroundings before taking on the impossible.

Next Page: Matt Fitzpatrick gets perspective after harrowing phone call about Ukraine