"Phil Mickelson will be back!" - Rory McIlroy on PGA Tour legend's mistakes

Rory McIlroy believes Phil Mickelson will be back on the PGA Tour soon and he deserves to be forgiven for his mistakes. 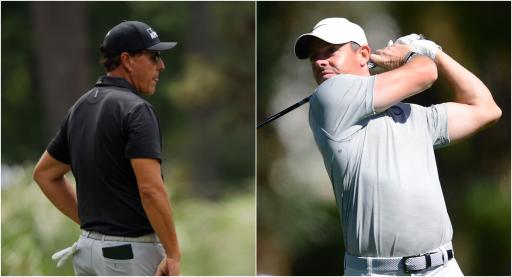 Rory McIlroy believes Phil Mickelson will be back on the PGA Tour and that the players will want to see him return to the schedule.

Speaking ahead of the Arnold Palmer Invitational, McIlroy also said Mickelson should be able to make mistakes and be forgiven, with reference to the Saudi golf league.

In comments made to Alan Shipnuck, Mickelson said that he entered into an agreement with the Saudis in order to gain leverage to improve the PGA Tour.

The 51-year-old described alleged atrocities committed by the Saudis, but in a later statement, he called those behind the Saudi golf league as visionaries.

"Phil will be back. The players want to see him back. He's done such a wonderful job for the game of golf and he's represented the game of golf very, very well for the entirety of his career," said McIlroy.

"Hopefully, he comes back at some stage, and he will, and people will welcome him back and be glad that he is back."

Related Articles
Jon Rahm apologises to Kelley Cahill after TMI joke: "She can tell you!"
"Poulter would beat Scheffler in PGA-LIV match" | From The Tips Episode 5

Mickelson is responsible for many incredible moments on the PGA Tour since he turned professional in 1992. He has six major titles and 45 PGA Tour wins to his name.

It seems that for now, the Saudi golf league won't take off as many of the world's top players have rejected the idea. Tiger Woods, Jon Rahm, Collin Morikawa, Justin Thomas and McIlroy are just a few who have committed their futures to the PGA Tour.

McIlroy is back at Bay Hill this year, an event he won in 2018. He is looking to find form in the build-up to The Masters as he seeks to complete his career major grand slam.