WATCH: Golfer holes UNBELIEVABLE putt but he BREACHED THE RULES!

Did you know about this golf rule? 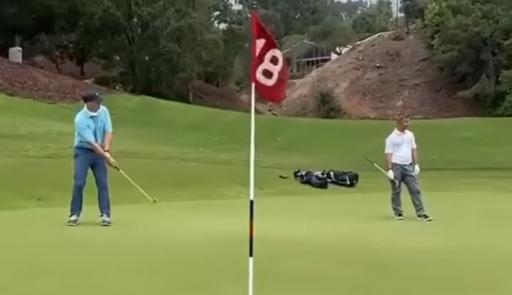 A video of a golfer holing an unbelievable putt has gone viral on Instagram this week, but unfortunately for the man in question he breached the rules during his match.

In the video below, posted by our friends over at Golf Rules Questions, the man proceeds to putt way left of the flag to use the contours of the green to bring his ball down towards the cup - only he decided to get his caddie to stand in the position he wanted to putt the ball.

That move, under Rule 10.2b, is a breach of the rules. This particular rule, according to the R&A rule book, states: "While the stroke is being made, the caddie must not deliberately stand in a location on or close to the player’s line of play or do anything else (such as pointing out a spot or creating a shadow on the putting green) to point out the line of play."

So while it was an incredible putt to end up seeing the bottom of the hole, unfortunately, in a real match at least, the player incurs the general penalty which is a two-shot penalty in strokeplay and a loss of the hole in matchplay.

Anyway, golf rules aside, what a putt. We are fairly certain he could not do this again if he tried!

WATCH THE OUTRAGEOUS PUTT BELOW

NEXT PAGE: PHIL MICKELSON IS NOT CONFIDENT THAT HE WILL RECEIVE A PICK IN THE US RYDER CUP SIDE