Everyone loves a good golf trick shot and this golfer in the footage below produces an incredible effort that combines a flop shot and a huge drive. 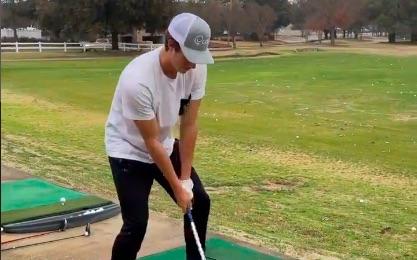 As much as we enjoy watching our favourite players on the PGA Tour each and every week, we also love watching golfers have some fun and hit some trick shots.

What we love about trick shots is the creativity and ingenuity of some people. You see people's personalities come out with trick shots and we have another cracker below.

As you can see, popular social media golfer and trick shot specialist Garrett Clark begins with a wedge and develops into a driver by the end of the sequence.

In true Phil Mickelson style, he flops his ball up into the air, perfectly slicing his clubface underneath. The ball pops up into the air for the next stage of the video.

As the ball remains in the air, he puts his wedge in his right hand and controls the ball on his clubface as if there is velcro on the club and the ball.

As he keeps the ball on the face of the wedge, he picks up his driver in his left hand. You can tell that Clark is preparing a grandstand finish.

He lifts his ball up into the air and drops his wedge. He then takes his two-handed grip on the driver and swings back to knock it out of the park.

He connects perfectly with the ball and it goes flying down the fairway. As stated previously, you have to love creativity and thinking outside the box.

Clark has many more videos on his Instagram page of similar trick shots and I would encourage everyone to go and take a look.