WATCH: Golfer plays his shot in front of wedding party!

When this golfer teed off with his friends at the start of his round, he definitely didn't think he'd have a wedding party stood around his ball. 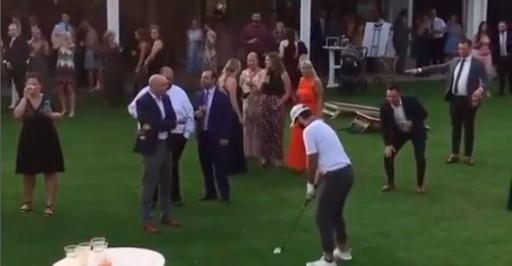 This golfer seemed to hit an errant tee shot and his ball finished in the back garden of someone's house, but it wasn't just anyone's house.

In the back garden, there was a wedding reception and everyone looked to be having a good time, dressed up smartly and drinking heavily.

The player walked over to his ball, which evidently wasn't out of bounds, and he had the confidence to hit his ball in front of the crowd.

A couple of the wedding partiers stood in very close proximity to the player, who was under pressure to hit a good shot.

GolfMagic wants its readers to send in their funniest and craziest golf videos. Send them to us for a chance to feature on our social media channels.

Related: Rory McIlroy: "I just got a little bit lax on that side of things"

The player seemed to strike his ball fairly well and the crowd shouted 'IN THE HOLE" as his shot travelled towards the pin.

"Pretty good, pretty good," said the excited cameraman. It is unclear where the ball finished, but it looked like a solid approach to the green.

Take a look below at the best comments from golf fans:

"The guy that yelled definitely works for Charles Schwab," one fan said.

Related: This is why Adam Scott isn't using a driver at Arnold Palmer Invitational...

"I like the guy bent over watching," one fan commented.

"They acted really cool about it but can’t imagine yelling fore at someone’s wedding," another fan said.

"Whoever made the “ooooo!” Sound during the backswing, needs the Marshal to get after him," another fan commented.

"Everyone wanted to see where it went," one fan said.

Next Page: Paul McGinley on Phil Mickelson: "He's a big boy, he can look after himself"