Paul McGinley on Phil Mickelson: "He's a big boy, he can take care of himself"

Paul McGinley admitted that the Saudi Golf League is a huge threat to the DP World Tour and he was surprised by Phil Mickelson's involvement. 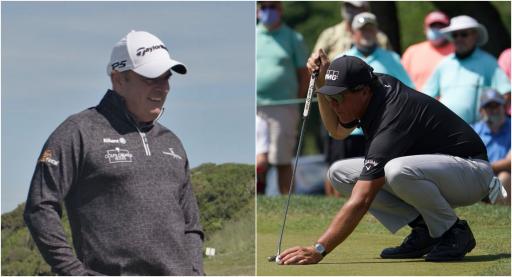 European golf icon Paul McGinley was surprised by Phil Mickelson's comments regarding the Saudi golf league, but said the six-time major champion can take care of himself during the fallout.

Speaking exclusively to GolfMagic, McGinley admitted that the Saudi golf league poses a large threat to the DP World Tour and the PGA Tour.

PGA Tour commissioner Jay Monahan is now also a member of the board. Monahan was recently on the end of a threatening letter from Saudi golf league commissioner Greg Norman, who questioned the legality of the tour's actions regarding banning players.

McGinley pledged his support for the PGA Tour but insisted that they must forget about developments with Mickelson, Norman and the likes and focus on the job at hand.

"They surprised me and they surprised everybody (Mickelson’s Shipnuck comments). I haven’t spoken to Phil Mickelson about it, my position is one that is working very hard with the DP World Tour and particularly coming out of Covid," said McGinley.

"We’re aware of what was going on with the Saudis and we’re watching what’s going on in the media and at the same time, we’re working closely with Jay Monahan who’s now on the board of the European Tour.

"That’s why we are very worried about it in Europe and that’s why we tried to collaborate with the Saudis. They were originally part of the European Tour, they had an event but they wanted to move things and scale them up to have their own tour."

The Irishman, 55, revealed that meetings took place between players and representatives of the Saudi golf league during the Saudi International in February, which was won by Harold Varner III.

However, a host of the world's top players have rejected the concept which was planned to be sanctioned by the Asian Tour. The Public Investment Fund and LIV Golf Investments collaborated to invest $200 million into the Asian Tour.

After Mickelson's controversial words to Alan Shipnuck and his later statement, he decided to take time away from his golf career.

It is unclear as to when the 51-year-old will return, but McGinley said it will be a huge moment where all the eyes of the world will be on him.

"What Phil says, Phil says. I’m not aware of what was going on behind the scenes. I know a number of players were talking to the Saudis and obviously, a lot of them went over and played that event (Saudi International).

"A lot of meetings went on when they were over there and we were all aware of that, but we’re trying to come out through the back of Covid and make the DP World Tour better and we’ve done that.

"He’s going to be the centre of attention, but Phil is used to doing that. He’s had it all his career, I played in the Walker Cup against him in 1991 and he was even a huge star back then as an amateur, winning an event on the PGA Tour.

"We can’t be too concerned with what Phil is doing or what LIV Golf Investments do or what Greg Norman does. We’ve got to be concerned with empowering the European Tour and the whole group."

Next Page: Jason Day withdraws from Bay Hill after his mother loses battle with cancer