WATCH: How on earth did this putt NOT GO IN the hole?

How would you react if you hit a putt like this that avoided the hole? 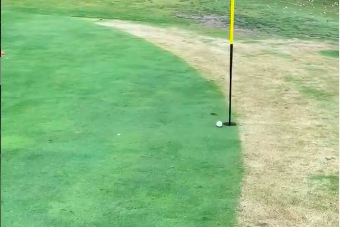 Putting can be a challenging and difficult part of your game. If you have had a bad hole, your short stick can save you a lot of shots.

If you can hole every three-footer that you are faced with or if you can two-putt from 30 feet each time, your scores will vastly improve.

But you also need luck and sometimes you can hit a putt that you wanted to hit and it doesn't find the bottom of the cup.

A video was posted on social media where one unfortunate golfer looked to have hit a perfect putt that looked destined for the hole. However, this did not turn out to be the case.

His ball trickled towards the hole, as if it was in slow motion, and as it reached the front of the hole, it veered to the right and defied all logic to miss the hole.

When the golfer, agonisingly watching his ball, hit his putt towards the hole, he couldn't have dreamt in his wildest thoughts that he would have a difficult chip for his next shot.

You will do well to find a ball that has travelled so slowly, yet travels so far. Once it impossibly passes the hole, it catches the dry ground and then it can't be stopped.

The player has not been helped by his unsympathising playing partners who all hysterically laugh during the putt. But if you were in their shoes, you would find it hard not to chuckle.

Golf is a hard enough sport in its base form, so when you suffer luck as bad as this, it really is a kick in the teeth.

NEXT PAGE: NIGERIA'S "NEXT TIGER WOODS" WINS GOLF EVENT YET AGAIN, AND SO DOES HIS SISTER!