Phil Mickelson will forever have nightmares about the 9th hole at the Country Club of Virginia. 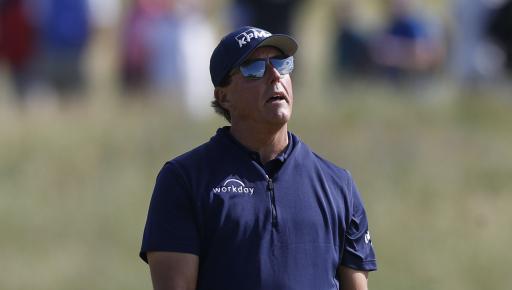 Unfortunately, calamity was repeated not once but twice at the Dominion Energy Charity Classic. On the 9th hole in the second round on Saturday, Mickelson made a quadruple-bogey 9.

Yes, he made a 9 on what was the third-easiest scoring hole of the tournament. He hit two shots out of bounds which led to him writing down this huge number for this 547-yard par-5.

This led to a 74 to follow up his first round of 71. However, Lefty arrived at the Country Club of Virginia on Sunday and he was clearly motivated to forget this disastrous memory.

He made seven birdies in a bogey-free stretch of his first 12 holes and he appeared to have turned a corner. However, he made a double-bogey at the par-3 4th hole, which was his 13th hole of the day.

This means that the 9th hole was his final hole of the tournament. And believe it or not, Mickelson stepped up and made another quadruple-bogey 9.

He ruined his good work from the first part of his round to finish with a 71. The six-time major champion finished in tied 47th place.

The incredible Bernhard Langer beat Doug Barron in a playoff to win the event, becoming the oldest winner on the PGA Tour Champions at the age of 64.

Despite his performance in Virginia this week, Mickelson has a great record on the senior's tour. In just five appearances, he has three victories.

NEXT PAGE: COLLIN MORIKAWA UP TO CAREER-BEST SECOND IN WORLD GOLF RANKINGS