Bryson DeChambeau on a video call with President Donald Trump, yes you read that correctly... 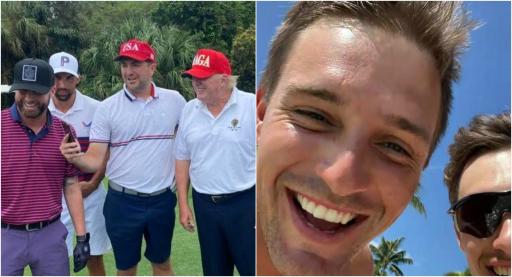 No one needs telling that in 2021, anything can happen. We have arguably seen the starkest example of this on the Instagram story of Long Drivers.

Rob Trump, a popular comedian who has risen to stardom on social media, is known for his impressions of former US President Donald Trump.

Well, it just so that happens that with a group of fellow golf fanatics, they met the controversial world leader who was outvoted by Joe Biden in the most recent US presidential election.

President Trump is an avid golfer and he owns golf properties in Scotland, Ireland, America and Dubai. In the footage, they are playing at Trump's course at Palm Beach in Florida.

RELATED: NIGERIA'S "NEXT TIGER WOODS" WINS GOLF EVENT YET AGAIN, AND SO DOES HIS SISTER!

The team from Long Drivers were playing with the team from PGA Memes, which is another popular social media golf platform.

While playing at the Florida venue, the group thought it would be a great idea to video call none other than Bryson DeChambeau who is currently on holiday in the luxurious Bahamas.

The Long Drivers Instagram story showed the group, stood alongside President Trump, speaking to the World No. 6 as he wore a big smile on his face.

It is fair to say that we did not expect to see images of the former US Open champion speaking to one of the world's most controversial public figures over FaceTime.

If anything, this just goes to show how popular DeChambeau has become since finishing the PGA Tour season and engaging with the US fans during the Ryder Cup.

NEXT PAGE: JEFF WINTHER: WHAT'S IN THE BAG OF THE MALLORCA GOLF OPEN CHAMPION?