Rahm on Ryder Cup win over Tiger Woods: "This is the best feeling of my life" 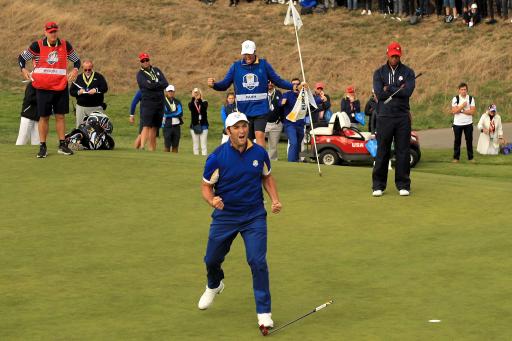 Jon Rahm picked up his sole point of his Ryder Cup debut week with a 2&1 victory over Tiger Woods at Le Golf National, then claimed it was the "best feeling of his life."

You'd never have guessed judging by his celebration on the 17th hole...

The 23-year-old Spaniard spoke about the moment afterwards.

“It’s a lot going on for me right now, to be honest,” said Rahm. “Memory of Seve [Ballesteros], many people. My grandfather, who would love to be here right now, who passed away at the PGA, was my biggest fan. A lot going through. And to beat Tiger, one of the greatest, if not the greatest, on the Sunday, with a pivotal point, I was so aware of it, it’s the best feeling of my life.

“The pride and humbleness I feel right now, it’s indescribable,” he said.