Cricket legend Kevin Pietersen and BBC presenter Dan Walker take the mick out of Piers Morgan after watching him SHANK his ball off the 1st tee at Wentworth's famous West Course... 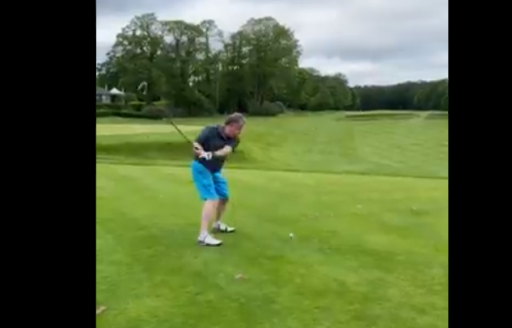 Piers Morgan was spotted shanking his drive off the 1st tee on Wentworth's famous West Course today, much to the delight of his playing partner and cricket legend Kevin Pietersen.

Morgan, the former Good Morning Britain host, was quickly ridiculed for his tee shot on social media by Pietersen, and also BBC presenter Dan Walker who was watching on in the group behind.

I’m currently 2 up through 6! pic.twitter.com/YPpxLS2UXN

Morgan is said to play off a 16 handicap, so he can clearly play to a solid standard, but we can only assume 1st tee jitters got the best of him on this occasion.

"Can't believe it, turn up at Wentworth and guess who is in the group in front? Yep Piers Morgan," tweeted Walker.

"And crucially he delivered the goods #shanksville"

According to Pietersen, who apparently plays off a low-single figure handicap, the match was 2 up thru 6 in favour of the England cricket hero.

And... crucially... he delivered the goods #Shanksville pic.twitter.com/jGSWWmsem8

Morgan stepped down from his role as host of Good Morning Britain after receiving heavy criticism for his remarks about Meghan Markle following her and Prince Harry’s interview with Oprah Winfrey two months ago.

The former newspaper editor was condemned for claiming he did not believe Meghan, who said she had struggled with suicidal thoughts due to the pressures of being in the royal family.