Tiger Woods has mastered every shot throughout his career to win 15 major championships, and this bunker shot is yet another example. 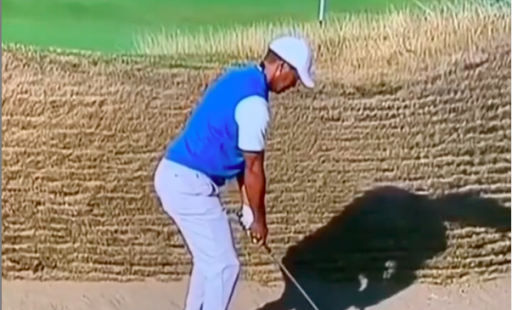 With just about every shot you find in golf, you could be told to do something different in terms of hitting the best shot. Bunker shots are no exception.

If you find yourself plugged in a bunker, some coaches would advise you to close the clubface of your wedge and muscle the ball out of the trap.

Some golf coaches would advise you to open up your clubface and splash your ball out. There is more than one way to achieve success when playing a bunker shot.

It would appear that Tiger Woods likes both options as he shows in this video below. He found himself in a sand trap with an extremely high lip at The Open Championship.

Links courses can challenge the best golfers in the world and on these courses, you will find bunkers and traps that you didn't expect to see. One costly error can ruin your scorecard.

As you can see, Woods was faced with a plugged lie in the bunker and with his practice swings, his technique to get the ball out of trouble was very clear.

His clubface is open and he is making full swings in preparation to splash the ball out of the bunker. He is also aiming left of the pin because the open clubface will cause a lot of sidespin.

As he hits the ball, he barely follows through. In this way, Woods has almost adopted both styles of plugged bunker techniques. He has opened the face, yet punched it out with a low follow-through.

There is not a shot that the 82-time PGA Tour winner can't pull off and we can't wait until he is back on the golf course, thrilling crowds like he has done for so many years.