Kyle Berkshire won the 2021 World Long Drive Championship and he set an incredible new personal best in ball speed which he posted on his Instagram page. 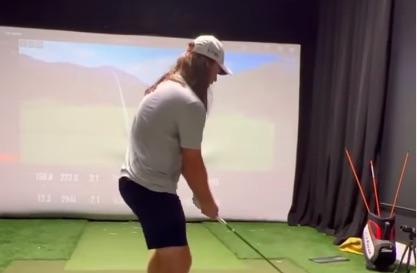 As you can see in the footage below, Berkshire smashes his ball into the simulator and reaches 234.4 mph. He also nearly reached 160 mph for clubhead speed too.

These scarily high numbers are the numbers of the current World Long Drive champion. He won his first world title in 2019 when in the final matchup of the event, Berkshire outdrove two-time champion, Tim Burke, with just his second ball.

The 25-year-old has got six Long Drive titles to his name and the longest drive he has ever hit in competition still stands at a staggering 492 yards.

It goes without saying that he is ranked number one in the World Long Drive rankings and it is these record ball speeds that have made him so successful.

"Set my new pr ball speed at 234.4 mph with the @titleist Prov-1 Left Dash! Got tantalizingly close to my goal of 160 mph club speed as well, topping out at 159.0 mph on @trackmangolf," Berkshire wrote on his Instagram page.

The man born in Maryland has proven to be an inspiration to many, including Bryson DeChambeau who finished seventh at the World Long Drivers Association Championship in 2021.

There's no doubt that Berkshire will be looking for his third win at the World Championship which takes place at the end of the year in October.