What does Bryson DeChambeau need to do to WIN the long drive world championship?

The 28-year-old Ryder Cup bomber will attempt to win the Pro Long Driver's World Championship in Mesquite, Nevada. Here's how you can watch it. 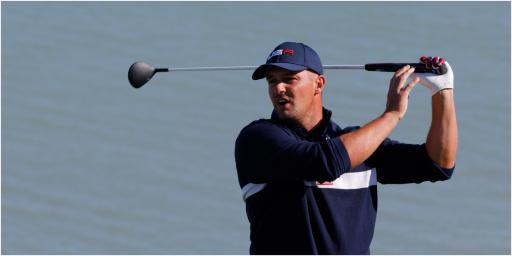 In the words of Phil Mickelson it seemed like it was inevitable: Bryson DeChambeau was always going to hit some hellacious seeds.

DeChambeau has a chance of making history tonight as the first ever PGA Tour pro to win the Pro Long Driver's Association World Championship.

He's flown through the starting field of 80 and is now among of group of 16 competitors vying to become the longest driver on the planet.

He's not the favourite. Far from it. But if things go his way then he could do something special and cause and upset.

If you haven't tuned in to the live stream on YouTube so far, the coverage can be a little bit confusing. But we'll try and make that clearer for you now.

In the field to start were 80 long drivers and they were divided into five groups of 16 for a series of knockout rounds. The top 12 finishers automatically advanced. The 13th place finisher was placed into a wildcard round, with the top four then advancing to the round of 64.

DeChambeau had little trouble navigating his way to this point. He's scored well so far. Oh yeah, scoring. That can be a bit confusing too. Four players are on the tee together, all hitting at the same time. Every player was given five hitting sessions. They had two minutes and 30 seconds to hit six balls. Then their cumulative scores would judge then be taken into account. Players are given 200 points for winning their group, 100 points for finishing second and 50 points for finishing third.

That's all in the past. We've now trimmed the field down to 16 players. DeChambeau is amongst some stellar company in Kyle Berkshire and Justin James. So, tonight we'll be splitting the 16 players into two groups of eight. The top four will advance. Once again the players will hit have five hitting sessions of 30 balls with their scores determining the final eight.

Once we reach the final eight players, the format shifts a little bit. They'll be split into two groups of four but each player will hit just six balls in total with the two longest balls counting towards the final score. The top two make the final. Done.

Bryson DeChambeau just won his heat and he's through to the round of 16 at the World Long Drive. What a world.

(The numbers are low due to serious headwinds... Bryson hit that last one with 214 ball speed, which is nuts) pic.twitter.com/iGZEJyS178

NEXT PAGE: FIVE OF THE MOST ICONIC PLAYER/CADDIE PARTNERSHIPS